Rhagoletis completa, commonly known as walnut husk, infests walnuts in most of the walnut-growing areas in California. Walnut husk feeds on different varieties of English walnuts. The husk is almost the size of a housefly and is bright in color. The adult husk has dark black prominent bands on its wings which bands around to form. It has yellowish-brown spots beneath the area where the wings are attached. It has large greenish-black eyes. The husk is prominent because its dark black-colored bands extend around to form v-shaped wings. The walnut husk fly has a one life generation within a year. This fly emerges as pupae in the soil and becomes adult in May till July. The peak of its emergence is between mid-May till mid of August.

The life generation of walnut husk flies is one per year. The female flies deposit eggs on groups, about 14 to 15 beneath the husk. The eggs hatch into white or off-white into maggots (soft legless bodies), which feed inside the husk and build up the black area that remains soft and smooth. The outermost layer of the husk usually remains in contact, its fleshy and plumpy parts decay and blemish the nutshell. The older maggot is usually one-fourth inches long and is yellowish-brown with dark black mouthparts. The maggot feeds on the husk for about three to five weeks, drops on the ground, and digs out several inches into the soil to become pupae. 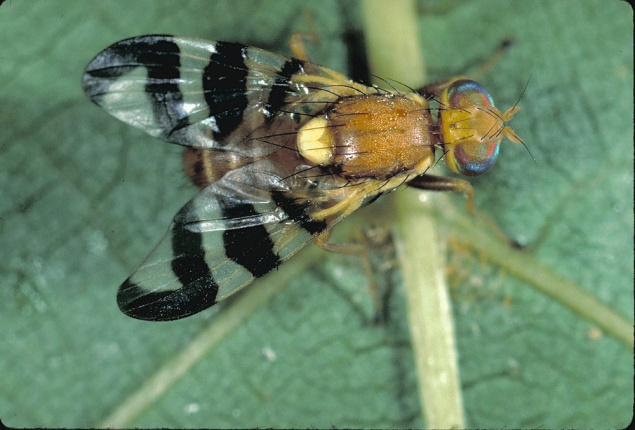 The black walnut husk is very beneficial for many purposes. The outer layer or covering of the husk is used to prepare different kinds of medicine. It is used to treat and cure worm infections like parasitic infections and other infections including diphtheria and syphilis. It is beneficial to treat leukemia also. Black walnut husk has several benefits. People use it in hair dyes and for gargling. It is also appropriate to heal wounds because it acts as an antiseptic. The black walnut may not be safe to eat. The dose intake depends upon age, health, and other conditions.

Consultation with the doctor or physician is necessary in this regard. Relevant directions needed to be followed before using any product.

The general sanitization process is required to reduce the number of walnut husk flies. The overwintering of the husk near the trees or orchard can assist with proper care and control. Walnut husk is also removed or its generation can be stopped using a trap and placing it under the walnut trees. However, the removal of husks is also necessary for healthier walnut trees.

Some kinds of insecticides or pesticides are used to control their generation. Bait or decoy also adds to sprays as a trap for the husk which attracts them, and they feed on the sprays.

Walnut husk flies remain in the soil for several years. Chemical control is necessary after every one month or as per the requirement. Where husk flies are in huge numbers, chemical treatments play a vital role. Multiple application sprays, bait, and some insecticides can control the generation of husk flies. It can reduce the damage caused to the walnut trees. The best time to restrict the new generation of husk flies is by controlling the adults before they lay eggs.

Proper monitoring plays a vital role in walnut husk removal. A sticky trap or placing nets under the walnut trees will be helpful. You can add bait or decoy to sprays as a tarp for the husk that attracts them.

Some kinds of insecticides or pesticides are necessary to control the generation of walnut husks. Commercial growers specially prepare some sprays combined with the baits for best results. A commonly used insecticide for walnut husk fly is GF-120 naturalyte fruit fly bait.

The husk flies remain in the soil for several years. It is required to repeat the control treatment process against their generation.