The spicebush swallowtail, generally look-like clouded greenish-yellow butterfly, has a scientific name Papilio Troilus Linnae. It is widely common in natural areas like flower gardens throughout the eastern and mid-western parts of America. Not only caterpillars but adult butterflies are great examples of malleable coloration. The adult butterflies look extremely colorful, beautiful, and attractive because of their vivid pigments. Despite their extremely significant features, they are considered to be poisonous.

The Butterfly expert Art Shapiro stated that both caterpillars and adults are poisonous. He further added, “Don’t eat ’em; they’re quite poisonous.” The caterpillars feed on a poisonous host plant commonly known as aristolochic. It contains the lethal toxin aristolochic acid, which is usually found in flowering plants. This acid is toxic for birds and insects and is more likely to be found in the leaves.

What Are Spicebush Swallowtail Caterpillars?

As addressed above, spicebush swallowtails (Papilio Troilus) have unique, bright, and interesting characteristics. They can be commonly seen in eastern North America, from southern Canada to Florida, and west to Manitoba, Oklahoma, and central Texas. This particular species is less commonly found on the western ranges and in New England.

The Spicebush larval pattern initially resembles bird droppings, but it is green with a pale yellow lateral line covering the caterpillar’s length in later appearances. The caterpillar’s underneath is pinkish-brown in color, and each abdominal part is enclosed by six blue specks outlined in black. Caterpillars have a couple of false eyespots sets: one set is toward the thorax’s back and is short and yellow. The other set is closer to the head and yellow with a black and white spot in the middle that resembles a black eye’s glare. The combination of the eyespots and a swollen thorax is supposed to mimic either green snakes or tree frogs. 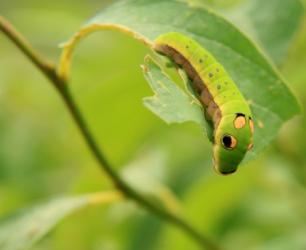 The professor of Evolution and Ecology at the University of California, Art Shapiro, declared that both caterpillars and adult butterflies could be harmful because of their poisonous nature. Larvae usually feed on the poisonous host plant named Aristolochic. All the Aristolochiaceae contain pharmacologically effective aristolochic acids generally found in flowering plants. This acid could be deadly for birds and insects. Caterpillars are much thinner and a bit shorter than our fingers. It is harmless to handle most caterpillars, but they can be toxic, harmful, and poisonous if eaten. They are soft and plumpy to touch but can cause itching to sensitive skin. Therefore, it is advised not to touch them without wearing hand gloves.

What do Spicebush Swallowtail Caterpillars eat?

The most important sources of nectar for adult butterflies are plants and flowers. They consume nectar from various plants that normally include clover, jewelweed, thistles, milkweed, and phlox. Various butterflies could not be easily fed on tubular flowers; however, the spicebush swallowtail’s long flexible snout makes it so comfortable for them to feed on plants.

A black spicebush swallowtail caterpillar eats Spicebush and white sassafras and feeds on many different plants in the Apiaceae, including dill and celery carrots, parsley, and parsnip. The caterpillars usually eat only at night and remain hidden in their leaf shelters during the day. Several creatures predate on the Spicebush swallowtail, including spiders, birds, and dragonflies.

Where Do Spicebush Swallowtail Caterpillars Live?

The black swallowtail caterpillar is relatively common in the eastern United States and California, Nevada, Colorado, and New Mexico, the USA’s western side.

The large pigmented butterfly (Papilio Troilus) is relatively long-lived. The development stages of this unique kind of butterfly are as follows.

They usually lay eggs singly. The eggs are spherical, greenish/whitish, and can be found on the underside of the host leaves. Generally, this phase’s duration is 4 to 10 days, depending on the temperature and host plant.

In the second stage, the young caterpillars initially appear as bird-dropping camouflage. They look like a bright green predator with large snakehead eyespots. The duration of the larval stage is 3 to 4 weeks. The larvae live in a leaf shelter by spinning silk around, which gives them a safe place to hide during the day; and continue feeding at night.