Solomon’s seal sawfly resembles a caterpillar when it is in its larvae stage. They are greyish white in colour and are about 2 cm long. They are distinguishable from a caterpillar because of their blackhead. They also resemble a flying ant when they are in their adult stage. During an adult stage sawflies are black in colour, 8-9 mm long, bearing wings which help them in flying.  They are known to destroy the many plants like Solomon’s seals and many plants belonging to the Polygonatum genus.

What is Solomon’s seal sawfly?

Sawflies belong to the group of insects, just like bees and ants. The off-springs of Solomon’s seal sawfly in the larvae stage resemble the larvae of the caterpillar, and these larvae feed on the leaves of the Polygonatum. The adult Solomon’s seal fly is fly-like and also bears wings. 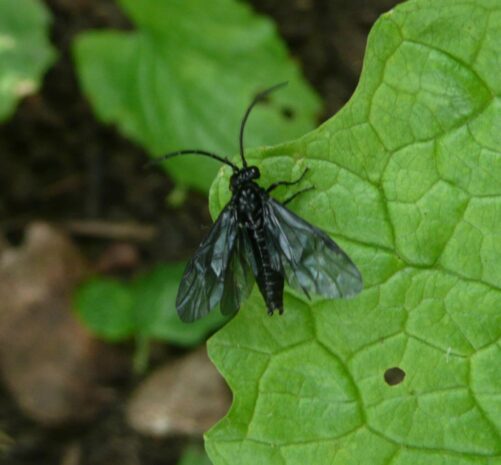 Some quick facts about Solomon’s seal sawfly are;

Sawfly females lay eggs on leaf stalks in May / June, during the late spring season, and their larvae hatch after a week. The larvae then feed on the plant for a month before entering the soil. After a month of being in the larvae stage, they then transform into a pupa to overwinter before growing into adults in May / June. The Solomon’s seal sawfly reproduces and generates offspring only once a year.

Although defoliation caused by Solomon’s seal fly may appear severe, it usually occurs after flowering and plants generally thrive in the year following an attack. Therefore this insect can be tolerated, and the plants will survive.

Check sensitive plants frequently from late May onwards, so that you can take action before a harmful infestation develops. When choosing control options, harm to non-target animals can be minimised by starting with the methods in the section on non-pesticide control. If that’s not enough to reduce the damage to acceptable levels, you can choose to use pesticides. Within this group, less persistent pesticides (which are usually certified for organic cultivation) are likely to be less harmful to non-target wildlife than those with longer persistence and systemic action.

Solomon’s seal sawfly can be treated in two ways, either with pesticides or without pesticides.

Solomon’s seal sawfly can be treated without pesticides in the following ways.

When controlling Solomon’s seal sawfly is challenging to be handled without pesticides, then it is necessary to opt for pesticides.