Bluebottle flies are somewhat similar to common house flies. They are usually metallic blue in color and have large red eyes. They are usually found in all parts of the world, and they prefer living in temperate regions where the climate is comparatively hotter than other areas.

Bluebottle flies are often regarded as filthy flies because they reside on the filthy matter only. They are found on decaying matters like animal feces, animal carcasses, trash, etc.

They also breed in the same place where they reside. They are the cause of transmitting many diseases like typhoid, dysentery, etc.

What is Bluebottle fly?

Bluebottle fly is commonly known as Calliphora vomitoria, orange bearded bluebottle, or bottle bee. They belong to the species of Blowfly, the family of Calliphoridae, and genus Calliphora. They are fairly large as compared to the size of the housefly and can be very easily identified because of their metallic blue colored bodies. 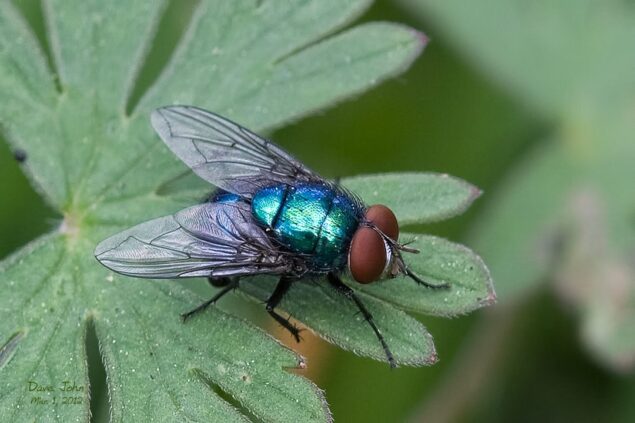 Bluebottle flies cannot bite, but they sponge-like mouthparts through which they suck up the decomposing matter. The same fly who rested on to some decomposing matter, faces, etc. when comes in contact with any organic land like human food, etc. then it becomes the sources of transmitting several diseases like,

Bluebottle flies go through the complete life cycle, from egg to larvae, then pupa and adult. The female blue bottle lays her eggs in the same place where she feeds, i.e., decaying meat, animal feces, or trash. The eggs then transform into larvae, which are pale whitish in color, and also called maggots. As soon as the maggots hatch from their eggs, they begin to feed on decomposing animal carcasses or any trash which is present at the place of their birth. After a few days, they become a pupa, and this pupal stage stays for the longest time in their developmental cycle. During this time, they tend to move to a drier place where they bury themselves in the soil. After two to three weeks, an adult is formed from the pupa and mate to begin the lifecycle again.

Blue Bottle flies are common around the world, especially in Europe, Alaska, Greenland, Southern Africa, the United States, South of Mexico. They prefer higher elevated regions and can be found during all the four seasons. During winters, they are also found hibernated and do not come out until a specific raised temperature is achieved.

Bluebottle flies only attack the places where they can binge on ready-made food, and they do not have to find the food by attacking their prey because this small creature cannot do so. They are often attracted by decomposing matter present inside the house, animal carcasses, pet feces or trash, etc. you can also see them around during the winters because at that time, blue bottle flies are often in search of warm and cozy shelter, and they might have your home for that.

Seeing them around the house means that this is the best time for infestation. Since this pest is very small, you can only observe the activity of the adult blue bottle flies. The presence of adult blue bottle flies can also be a warning sign because these adults might have started breeding their new generation.

These unwanted guests can be avoided by some of the following measures.

● Blocking the incoming routes to the house during summers, keeping doors and windows closed for the blue bottle flies can be a very effective measure against these pests.

● Since they are attracted to trash and decaying animal matter, it is necessary to clean the compost bins and mouse traps (if any). This will help to remove potential breeding sites of the flies.

Bluebottle flies are unwanted guests these days. They can be identified by the following characteristics.

● They possess the same size as that of the houseflies.

● They have a differentiable body, which is metallic blue.

● They have black legs.

● They also possess antennae, like those of the houseflies.

● Bluebottle flies have large eyes that are red in color.

● They have transparent wings.

● Because Bluebottle flies feed on decaying flesh, so if you find them in your house, this might be the sign of decomposing animal matter in your house.

● They can also be found near the places of decomposing animal feces, carcasses, and trash.