Learn all about woodlouse spider and brown recluse spiders bite and all about their poison.

Woodlouse has six eyes, a dark-red body and a yellow-brown abdomen. The colourful spider got its name because it preys on woodlice. Woodlouse spiders, Dysdera crocata, are commonly found in homes and gardens throughout North America. Originating in Eastern Europe, they have spread throughout the world.

The spider gets its name from its prey, the woodlouse, also known as sow bugs, isopods and roly-poly. They’re common in many parts of the United States and have only recently been found in decent numbers in the Pacific Northwest.

Most brown recluse spiders, which are also called violin spiders, live in the western and southern United States. Most are about 7 mm (0.25 inch) and have a leg span of about 2.5 cm (1 inch). On the front half of its body (the cephalothorax), it has a dark violin-shaped design, the “neck” of which is formed by a conspicuous furrow on the midline of its back. The brown recluse has extended its range into parts of the northern United States, making its home in caves, rodent burrows, and other protected environments. Brown recluse spiders also set up shop in the undisturbed spaces of buildings, such as attics, storage areas, and wall or ceiling voids.

Brown recluse spider’s bite is venomous. While a woodlouse spider’s venom does not usually cause serious harm to humans, it is possible for bite victims to suffer allergic reactions due to the injury. People with compromised immune systems or other medical conditions may also experience more serious reactions to such spider bites. The Mayo Clinic recommends seeking medical attention if a spider bite is severely painful or the victim experiences abdominal cramping. A growing ulcer at the bite site is another reason for a doctor’s visit.

The spider’s fangs are large and thick and protrude forward. Unlike most spiders, the woodlouse has only six eyes, which are arranged in an oval shape. The brown recluse spider, Loxosceles reclusa, is often implicated as a cause of necrotic skin lesions. Recluse spiders, as their names imply, are rather secretive in their habits. They are nocturnal spiders that actively attack prey and subdue it with venom. Although they don’t use silk for prey capture, they do use it to line their diurnal refugia. In nature they are found under rocks and in crevices and are considered “synanthropic” meaning their populations benefit when associated with humans. When a habitat is conducive to recluses, dense populations are found. Part of the reason is that recluses are highly tolerant of conspecifics; they are one of the few spiders that can be reared communally in a jar, given that there is sufficient prey availability.

A woodlouse spider bite is not an event that you could ignore. It can be quite painful when the spider bites and the bites are venomous. With that being said, however, the venom from the woodlouse spider is not very harmful to humans. Those who have been bit by a woodlouse spider report itchiness at the bite site and a higher level of inflammation than normal. These can often be treated with over the counter products. 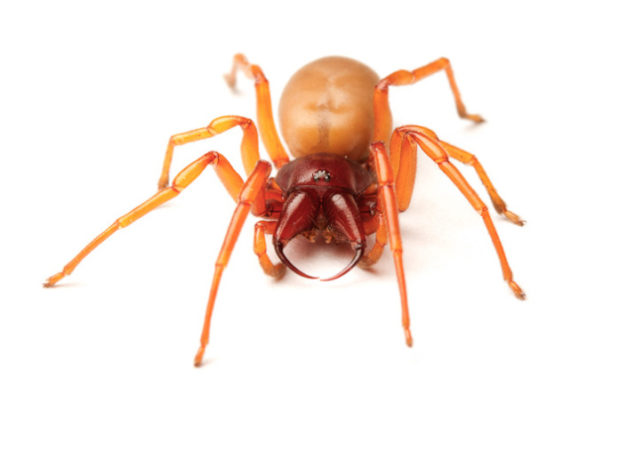 Despite their reclusive habits, they do occasionally bite humans. Recluses typically bite when they are trapped between flesh and another surface, as when a sleeping human rolls over on a prowling spider, or when putting on clothing or shoes containing spiders. Ways to reduce bite risk from recluse spiders include: 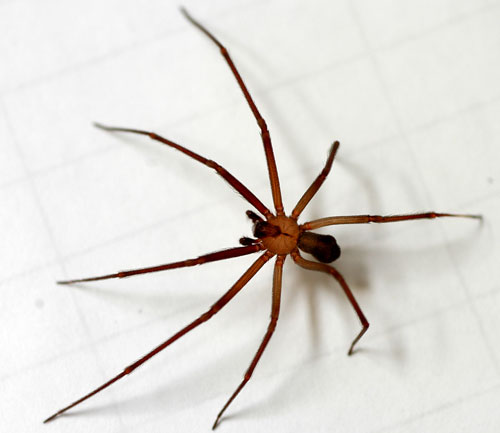 Which is more Poisonous and Dangerous?

The brown recluse spider is the most dangerous and poisonous spider in the United States. Its venom destroys the walls of blood vessels near the site of the bite, sometimes causing a large skin ulcer. Research in 2013 revealed that a protein in the spider’s venom targets phospholipid molecules, which make up a good portion of cell membranes, and transforms these molecules into simpler lipids. The wound that is produced may require several months to heal, or it may become infected, which could lead to the death of the victim. Deaths from brown recluse spider bites are rare

2 thoughts on “Woodlouse Spider vs Brown Recluse, Which is more Poisonous?”