Mediterranean flour moth is a common pest found inside food containers, grain bins, and many food storages, transportations, processing, and distribution areas. They feed on grains and also contaminate it. They have pale grey bodies and grey striped forewings while the lateral wings are off-white in color. They are considered as enemies to food industries and different food storages, which ultimately cause damage to the economy of the country, especially for the developing countries.

Since they reside on the grain particles and also lay their eggs over there as well, so you might have eaten some of them, but they will not cause any harm to you.

What is Mediterranean flour moth?

The Mediterranean flour moth belongs to the family of Pyralidae, which is a common pest of cereals and many food grains. They are found all over the world, especially in hot climatic regions. They have pale grey bodies.

The female Mediterranean flour moth lays eggs in greater numbers within a range of 110 to 680 eggs. She usually lays eggs in a cluster, in places where there are accumulations of large amounts of grains and other food sources. The laid eggs are attached to the food, grain, or flour—the eggs hatch in three to eight days. Temperature and heat play a vital role in their reproduction. The eggs hatch into pinkish-white larvae having numerous dark-colored spots on the body. The head of the larvae is also of a darker color than the body. The larvae remain in the silken tubes for around forty days until they transform themselves into fully matured. Once the larva is matured, it will leave its existing place and will wander in search of a new place where it can spin the silken cocoons, and then transform themselves into a reddish-brown pupa. After one week or two, this pupa develops into an adult moth.

Since the reproduction of Mediterranean flour moth is greatly influenced by temperature, therefore in warmer areas, the moth may take 5 to 7 weeks to complete its life cycle. 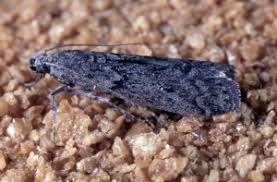 According to a wise saying, “Prevention is better than cure.” In the same way, prevention is better to avoid insects. For complete prevention of Mediterranean flour moths, you should keep the grain and flour containers clean and tidy. The container should be cleaned, washed, and dried to remove any existing Mediterranean flour moth. You can also keep the containers outside in the sun so that the ultraviolet rays of the sun will kill germs, bacterias, etc.

If the container is already present with some grain or flour with these moths, then the best you can do is to empty the container and clean it with the above-mentioned procedure and treat it with insecticides properly to closed any further passage for the moths. Otherwise, they will come again to irritate you. The containers or storage spaces for grain and flour should also be treated with proper insecticides, cracked or any opening should be sealed properly, and the storage area should be properly screened to eliminate any fine particles or kernels left behind.

If the moth still manages to enter the storage areas, then proper and protective fumigation is needed. Since some fumigation materials are very toxic, a professional is required for its application.

These small pests can cause great damage to the economy of any country because they tend to damage the food present in the farms, storage, transportation, processing, and during distribution to homes and factories. These moths feed onto this food and contaminate it at the same time. The contaminated food no longer remains beneficial for trade or any other purpose, and this can give a massive setback to the economy of any country or owner of the grain.

Since they lay eggs directly onto your food sources, they are confused as harmful. But scientists say that there is no need to panic if you have eaten these moths because they do not spread any disease, parasites, or pathogens.