When it comes to recognizing pests, there are sometimes challenges involved in matching the appropriate name with the correct appearance of the insect. Regarding Bald-Faced Hornets and Yellow Jackets, this is particularly challenging. They share a lot of visual characteristics, making differentiation challenging.

Wasps belonging to the subspecies known as yellow jackets possess a distinct yellow color that makes them easy to identify. Yellow jackets are mostly found all over the world. The bald-faced hornets, despite being called hornets, are yellow jackets with black and white stripes. Their white and black color resembles that of hornets, yet their body structure is similar to that of yellow jackets.

The Vespula genus includes the familiar yellow jacket and the bald-faced hornet, both of which lack hair on their bodies but display a glossy appearance. They both are more lightweight than bees and possess the ability to inflict several stings on their prey.  Scavenger insects like the bald-faced hornet and the yellow jacket are considered useful since they greatly reduce the populations of harmful insects in gardens and farms. 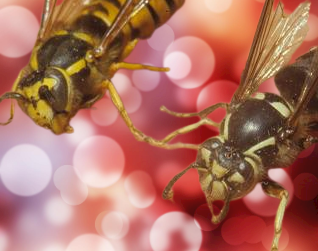 Bald-faced hornets possess non-barbed stingers, thus they sting several times. The venom in the sting of a Bald-Faced Hornet is unpleasant. The venom that is injected by the stinger often causes the affected area to be painful, itchy, and swollen for approximately twenty-four hours. However, yellow jackets usually die after stinging someone because their stingers become entangled in the flesh. A baldfaced hornet’s sting is very painful, but hornet stings are less often and typically more painful.

Their nests share certain similarities, but there are also notable distinctions. The nest of a hornet resembles an extended cone, whereas the nest of a yellowjacket is typically shapeless. There are no wax-producing glands in either of these bugs. So they create their nest from a paper-like material that is created from wood (or mud) and mixed with their saliva.

A bald-faced hornet’s nest is highly unusual. It begins as a small structure and expands as the colony grows throughout the summer. These nests are quite large, measuring up to 14 inches in diameter and far more than 24 inches in length at their longest point. Most of the time, the nests of yellow-jacket are built underground. A nickel-sized or smaller opening serves as the only entrance to the nest. Other potential habitats include building wall cavities, hollow trunks or logs, and rooftops.

The initial decision is whether or not control is genuinely required. There are several considerations to keep in mind:

On the other side, being stung by a yellow jacket with a contaminated stinger often result in illnesses or blood poisoning. A yellow jacket sting often results in the development of various serious medical disorders in addition to pain and potential allergic reactions.  Sometimes the consequences of this behavior can even be fatal.