The name Asian Forest Scorpion is used for multiple scorpions who belong to the same genus Heterometrus. The Asian forest scorpions are large, heavy-bodied invertebrate scorpions. Because of their black or dark brown shells, they are very similar to Emperor Scorpions. Their size ranges from 3.5 – 6 inches in length. They are the most aggressive species of their kind and tend to defend themselves with their pinchers rather than stingers.

Generally, it is advised not to be too close to this species as they are better to be viewed than handled. While doing so, you are at your own risk. They are poisonous, but their venom is of less toxicity than other deadly scorpions.

What is Asian forest scorpion?

Asian Forest Scorpion is a black-bodied animal, except for the tip of its tail with a stinger, called a telson, which is reddish-brown. It belongs to the class of Arachnids, followed by the order of Scorpiones, family Scorpionidae, and genus Heterometrus.

It has eight legs like all the other Arachnids, which are attached to the cephalothorax. It also has pedipalps that are pincher-like. Females have smaller pincers and smaller tails than males.

The Asian Forest scorpions are carnivorous in nature and eat crickets, insects, and spiders, and in this way, they help in controlling the population of insects and other arachnids through predation. 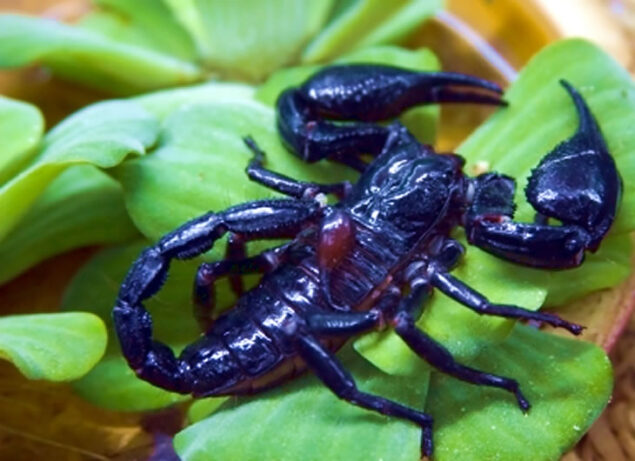 They are one of the largest scorpion species rivaling the Emperor Scorpion size.

Asian Forest scorpions have low toxicity levels in their venom as compared to other scorpions but more aggressive than other species of scorpions. Their venom is a neurotoxin and is used to paralyze their prey.

This is why it is advised to keep your selves away from this dangerous creature.

The black bodied animal is found throughout south-east Asia and is found usually under the logs, and can live up to 7- 8 years. They feed on to many other insects like crickets, worms, cockroaches, spiders, etc.

They hide beneath the logs during the whole day and usually hunt at night for its prey.

The identification of this black-bodied creature is very simple.

● They resemble other creatures of their family a lot and are similar to other scorpions.

● Their shell is black or dark brown in color.

● They have eight legs, like all the other arachnids, attached to the cephalothorax.

● They are usually found on the floor of the forest and in shelter areas like the plant debris and beneath the logs.

● They have a long tail with a stinger at the tip of their tail, which is reddish-brown in color.

● They have two eyes in the center of their head, and the other two to five eyes are along the side of their head.

● They are more aggressive than other scorpions of their family, but their venom is less deadly or poisonous than others.