Stinkwort is also known as Camphor inula, kaapse kibos, and stink seed. This intensely aromatic weed, found in Europe and Australia. This plant is native to the Mediterranian region of Europe, occurring as far east as Afghanistan, Turkey, and Pakistan. Stinkwort is an erect, tall fall flowering that grows about 2.5 feet above the ground. The flower heads are 0.2 to 0.3 inches in diameter and consist of short yellow ray flowers. This intensely aromatic weed was first reported in California in 1984. In California, this weed is found near the roadside. It is also found in Asian countries like Afghanistan, Turkey, and Pakistan.

Stinkwort is also known as Dittrichia graveolens, is a plant species in the sunflower family. Stinkwort is an aromatic, straight, erect tall plant that has small, feathery, yellowish-white flowers. The tiny seeds have a hat of hairs. The germination of flowers is in the late summers and early winters. Its stem is tall, bushy, woody, rigid, and oily to touch, 200 to 1300 mm tall. The flower head consists of yellow to red petals, 1 to 2 mm long. This plant has got the string taproots, whereas the seeds are enclosed in the fruit. Their main characteristic is that they are intensely aromatic, sticky, and oily to touch. 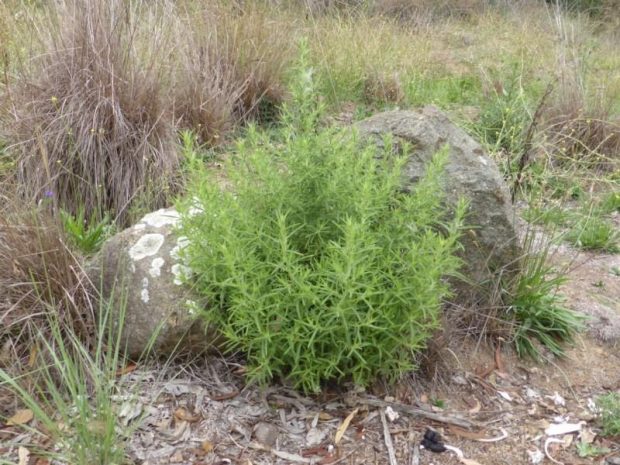 The Stinkwort plant is used as a herb in medicines, especially in Greek herbal medicines. Dried plants are also used in ham, become, and even smoking in Europe. Beyond its uses, it is also common to cause severe allergic problems. It can cause the worst dermatitis in people when they come in contact with the sticky resin.

So it is mandatory to wear gloves and protected clothes before pulling the stinkwort plant.
Dittrich graveolens can kill grazing animals which mainly eat crops and grass. The seeds that spread damage the digestive system of animals. It is now proving a real threat to the livestock of the animals. Along with these advantages, it has the worst effects on the grazing animals.

Stinkwort are intensely aromatic plants, considered appetizing species for animals. They look attractive to animals, but it has a poisonous effect on animals and can cause allergic reactions to humans. Not only this, but it also causes dermatitis in humans. Lowering the impact of this noxious weed requires a good weed management plan. It is necessary to control the harmful effects of stinkwort over grazing animals. So a proper control program needs to be established. It is found in California and can spread through mammal skin and birds.

It means that it has a fast growth in the late summer and early winters. The major challenge is to control this hazardous weed by applying proper management at the righteous time. Although, some methods that are used to reduce production are chemical and mechanical. However, good management technical tools could effectively mitigate the fast growth of seeds and their population size. There will be a risk in the dispersion of seeds if the management has not taken immediate steps.

Stinkwort is a native plant found in European countries like Germany and Asian countries like Afghanistan, Turkey, and Pakistan. Stinkwort looks luscious to animals as it has a strong smell like camphor. It seems attractive to animals, yet it is poisonous to grazing animals. This weed is also found in the regions of South-Africa.

New Zealand and California. Stinkwort is neither human nor animal friendly and does not provide any benefits. It can kill grazing animals and a great source of allergies and dermatitis in humans. Stinkwort is not beneficial to animals as it is a source of destroying the livestock. It secrets a strong smell and is not sound for human health. That is why it is not environmentally friendly.

Through the hand, Stinkwort could remove before flowering. Once flowering has started, it can remove plants from the soil. It will guarantee no production of seeds. The growth of stinkwort has rapidly increased during the past decades. It has a strong, pungent smell that attracts the animals and is the real culprit of destroying the livestock. Not only this, it creates allergic reactions which can affect humans. Stinkwort has a shallow root system, so it can be controlled and can eradicate by removing the root system. Manual control of this plant needs more care as it secretes sticky oil and can cause allergic reactions. Proper care and precautions are necessary to remove the plant by wearing long gloves and well-protected clothes.