These termites can be avoided by removing rotten wood structures, repairing any plumbing leakage, and treating the area with products that contain borate.

What are Dampwood termites?

Dampwood termites, also called rotten wood termites, belong to the Termopsidae family. They are usually found in areas of high moisture content, inside decayed wood pieces, inside fallen logs, tree stumps, old buildings, and other wooden structures like doors, windows, fences, etc. To keep themselves active and for their survival, they have to keep themselves near humid areas and places where there is ample amount of moisture content.

They are larger than the dry wood termites and other termites, and they also bear larger heads. They live and build small colonies rather than bigger ones. 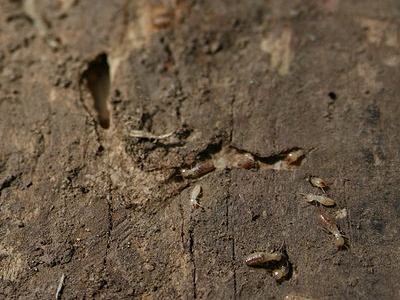 Some facts about the dampwood termites include.

Since dampwood termites need moisture for their survival, so the critical element to avoid dampwood termites is identifying and eradicating any water issues inside or around the house, other wooden structures etc.

Replacing the dampened wood and treating the bare wood with products of borate can help trap these irritating termites.

But still, if you were not able to avoid them and they have finally invaded your home, then you must observe the signs of an infestation which are shedded wings of the termites, holes in the wood structure, damage caused to wooden frames such as if the wood is finely sandpapered, piles of faecal pellets, dyed to match the colour of the wood being eaten, have an elongated shape and rounded ends, in contrast to the flat surfaces of dry wood termite pellets.

To cope with the problem, it is necessary to reduce the humidity in the infected areas. Humidity can be avoided by repairing any leaking area of plumbing, increasing air flow, making sure drains are working, and adjusting structures to minimize water contact with wood and soil.

Products that contain borate can help to treat structures that are invaded with dampwood termites.