The Snakeflies are one of the existing remnant species. They existed about 140 million years ago during the early Jurassic period. These flies belong to predatory insects having a characteristic tiny mobile head accompanied by a lengthy but slender prothorax. That is the reason their name includes the term “Snake.” The Snakelfies are very rarely seen.

The Snakeflies are usually found in temperate portions around the globe and are not observable in regions like the South or the tropics. However, it is interesting to note that snakeflies, though being predators, seldom bite people or sting.

Snakeflies have four membranous wings. These membrane-containing wings cover the whole predator right above analogous to a rooftop when the insect is in the resting stage. These wings comprise minute veins ranging from 6 to around 17 millimeters long.

Their larvae are dependent upon insects residing on the wood. They feed other smaller insects also such as caterpillars, aphids, or eggs laid by various other insects.

If we talk about their larvae, their length range lies between 12 to 25 millimeters. Their larvae color is grey or red in appearance. The pupa stage of these predators does not get encapsulated in a cocoon and is present in a vibrant form.

Snakeflies lay eggs in the form of clusters. They usually take approximately 2 to 3 years to complete their life cycle. 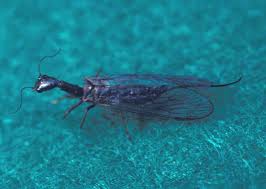 what does the habitat of the Snakeflies seem like? Where do these flies are more likely to survive the best? Below, we are going to mention that as well.

Their species are distributed widely among coniferous forests, continents such as Europe, and some regions of Asia too. However, their species are not restricted only to Europe and Asia but also lesser extent to North, Central America, and the Sahara desert in Africa.

They inhabited the Rocky Mountains in North America, Canada to a border named Guatemalan. These are also found from Japan to Spain. It is essential to mention here that the Snakeflies are widely present in the Central region of Asia compared to any other place. Some species of these flies are limited to only specific mountain groups.

Snakeflies tend to appear as harmful creatures but on the contrary, they are not. The same is the case with the female Snakefly, though it may seem to carry long stingers.

The Snakeflies are supposed to be pretty much beneficial when it comes to forests pests predators. So, from a general point of view, the Snakeflies feed on other insects and consequently do not cause any harm to human beings or other organisms. However, a small population is known to be stung by a Snakefly but those cases are very rare.

The Snakeflies are also known not to be associated with any loss related to any house items. So, they do not cause any major setbacks or damage but are usually more beneficial.

Snakefly belongs to either of the classes known. There are around 175 kinds of species of Snakeflies that are recognized and characterized so far, having a long prothorax and a small-sized head. A Snakefly has a length of approximately 15 mm that is equivalent to 0.6 inches.

Therefore, Snakefly’s species in the majority exist around 0.6 or 1.2 inches in length or 15 to 30 mm as discussed above. The size of its roof-kind wings that tend to cover its whole body is between 6 to 17 millimeters.

The body of a Snakefly is composed of three pairs of legs like any other ordinary insect that are similar in both respects, be it from the appearance point of view or the similarity of the size. The large compound eyes of Snakeflies are usually present on the sides of the head. Members of some families of the Snakeflies also lack eyes.