Poa annua is also known as annual meadow grass, bluegrass, or poa simply. It is supposed that this grass originated from a hybrid of Poa infirma and Poa supina. It is a weed by nature and is usually present in regions with temperate climates.

However, as compared to the merits this weed offers, the number of demerits are more. For instance, poa annua is more vulnerable to diseases such as Anthracnose and Fusarium patch. Under stress, this weed tends to get yellow-greenish unappealing color. It also causes putting and bowling surfaces. Therefore, they are seldom considered to be a threat to your garden plants or ordinary grass.

Poa annua grass is capable of self-pollination. For this reason, it is the most abundant grass weed existing on the earth. The seeds of poa annua are dispersed readily by animals, wind, humans, water, birds, or farm implements.

The meadow grass germinates throughout the whole year. However, its peak time of emergence is from April to September. With the decrease in temperature of the surrounding, the germination process tends to decrease.

Maximum germination is visible at a temperature of 7 degrees celsius. It is also dependent on the moisture of the soil. Soon after germination, it forms a tufted, erect green plant and produces flowers within 44 to 55 days. 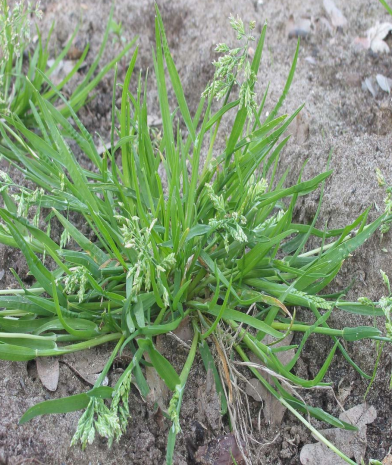 What are some key features of this weed which make it easier to distinguish from other grass? This knowledge is of great significance to prevent it from the process of seed dispersal. Therefore, let’s get to know that right below.

The characteristic identification feature of this grass is that it is a tall, erect, and compact stalk of the seed. To recognize the poa annua grass throughout the piece of land is simple. It becomes visible in the lawn during early summers or late spring.

A person may consider reducing its size to get rid of this weed. But this alone is not sufficient.

The probability of annua’s dispersal is minimized by following either of the methods mentioned as follows.

The majority of people make use of pre-emergent herbicides. Now, what does that mean? Pre-emergent, as the name indicates, are applied during early fall and spring. It prevents the poa annua grass from germinating more readily. However, the seeds are strong enough to tolerate the weather conditions; it is encouraged to repeat this process several times.

But this method also kills any other plant, so the suggestion is limited only when a person intends to destroy the whole plants in the garden or lawn along with the grass weed.

The practice of watering the plants deeply is yet another thing to look after as it allows the plant to compete with the weed.

Drilling favors the emergence of this weed. It is essential to use clean machinery while transferring its seeds from one place to another.

Some other cultural measures accompanied the treatment of the poa annua or bluegrass. For instance, the use of spring-sown crops in rotation leading to the postponement of pasture’s cultivation.

However, in other circumstances, rather than performing a single operation, cultivated boundary strips have proved to be far much better and efficient around the field in controlling and treating the weeds. The conclusion is, though the poa annua is a threat to the garden, it is manageable.