The silver-spotted tiger moth (Lophocampa argentata) is a defoliating caterpillar belonging to the group of moths, including the hummock moth and the black and orange caterpillars commonly referred to as “woolly bears.” Silver-spotted tiger moth caterpillars are active during the fall and winter seasons. They begin their feeding in autumn and will resume their feeding after winters in the next spring. Tiger moth’s populations are generally low due to predators, parasites, diseases, and winters.

The main host of these caterpillars is the Douglas fir, although the damage is purely superficial and does not cause a decrease in the growth or death of trees. Adult tiger moth caterpillars vary from 3 inches (8 cm) in length to 3.8 cm when matured. They range from reddish-brown to black, with clusters of black and yellow hair on their back. These hairs can irritate some people’s skin when they come in contact, causing rashes.

Unlike many wooly-bear-type caterpillars, they do not sting but have toxic, stinging hair, which is irritating to sensitive people and can cause burning sensations and rashes. Therefore, it is recommended not to touch them with bare hands. Also, do not rub your eyes after touching the tiger moth caterpillar. Otherwise, the hair may get caught in the eye tissues. So, it is better not to approach them or touch them.

Since tiger moths are less damaging to landscapes and a serious plant injury is less likely to happen; therefore fewer management efforts are required. We can control these insects in the landscape by the parasitoid wasp and by introducing large flies in the affected areas, which cause the death of the moth population. Tachinomiya similis (Williston) is a large fly that also feeds on this insect. We can cut and destroy the caterpillar tents to control their population. 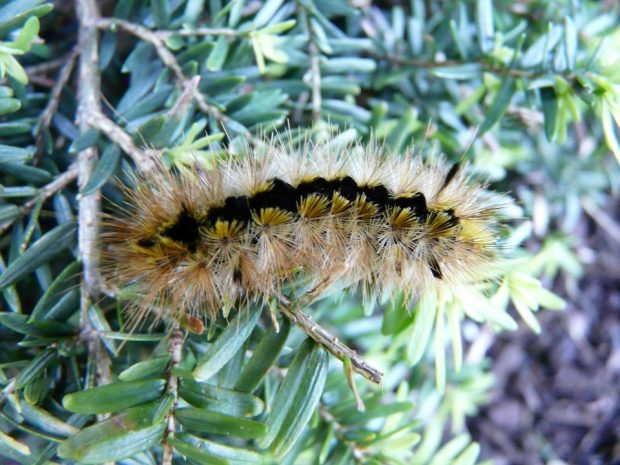 Silver-spotted Tiger Moth Caterpillars usually range from reddish-brown to black with about 8 cm during their adult phase. When the caterpillars are fully mature, their size is about 3.8 cm. They have clusters of black and orange hairs all over their back. Most of these colorful, hairy wooly bears are harmless to people. However, if touched, a few have irritating hairs that can cause people to develop skin rashes and burning sensations. Still, they are not poisonous and can not develop any fatal issues when touched with bare hands.

In particular, according to Mick Cooperative Extension University, hickory tussock can cause quite severe rashes. However, it is important to note that you must touch this caterpillar to develop a rash; otherwise, it is not harmful.

The caterpillars of the silver moth feed on thorns. They form large silk webs centered on trees’ upper branches and tops, often encompassing terminal growths. The larvae feed on older foliage, sometimes defoliating trees during the initial days of spring. Defoliation of the tiger moth is more common in young pines but usually occurs naturally rather than in the landscape. Although cobwebs and larvae can be very visible in late winter and spring, this insect causes little defoliation.

Permanent damage to the tree is rarely the consequence of tiger moth caterpillar feeding, which is usually confined to the topmost foliage. Damages are infrequent and usually resolve within 1–2 years.

Every native pine is the host plant for tiger moth. Douglas fir is the favored host, but pine, thuja, spruce, and true spruce are also affected by the tiger moth caterpillar feeding.

The subspecies of the same silver-spotted tiger moth, L. argentata subalpine, feeds mainly on juniper and sometimes on pinyon.

The Silver-spotted tiger moth only produces one generation per year. Adult moths appear and yield their eggs in July and August. Bunches of round emerald green eggs are dropped on the needles at the tips of the branches. During September and October, small, dark, hairy caterpillars hatch from their eggs and feed on the thorns in the upper branches of the host pine in the herd, forming a silk web.

The larvae hibernate in these cobwebs in dense clusters. During warm winter days, they feed on the foliage of the host tree. As the larvae mature, lesions and cobwebs become more visible, which is of great concern to homeowners. Tiger moth larvae reach maturity very early and are among the largest caterpillars found on conifers during spring.

The pupae appear in June, and then the adults develop from mid-July to mid-August. The females lay about 450 eggs in groups.