We all have heard of woodworm, the term used to refer to the larvae of the furniture beetle, because of the reason that they can be destructive. Still, there are other forms of infestation that are not usually considered harmful that you may not be aware of the beetle is one such visitor. Of course, if you have suffered from a plaster beetle infestation, then you should be aware of this pest.

Plaster beetles have their name from the fact that they are often seen in new spaces, where wet plaster often provides ideal environmental conditions for these visitors. They are also known as scavenger beetles; plaster beetles are part of the Lathrididae family, a family of over 1,050 described species. 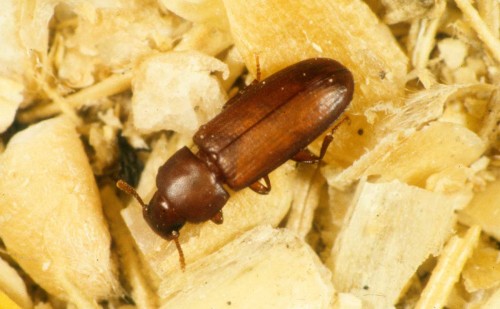 What are Plaster beetles?

Plaster beetles belong to the Lathridiidae family. The name of the plaster beetle comes from its habit of eating fungus and mould growing on the wall. Homeowners can spot plaster beetles as they crawl out from under the baseboards when they come to their adult stage. They are commonly referred to as “mould beetles” or “tiny brown scavenger beetles.” They usually appear in homes at the end of the summer season.

Some facts about the plaster beetles are;

Plaster beetles live in humid environments where fungus can grow and can be found all over the world. In the wild, they look for natural protective barriers such as rocks and water sources or other wet spots where mould and mildew can grow.

Ideal habitats for plaster beetles in a home are humid places such as bathrooms, basements, and undergrounds. Areas where water is continuously running, such as water taps or leaking windows, also create a favourable environment for plaster beetles to live. Excessively high humidity in any setting will attract plaster beetles.

Plaster beetles feed exclusively on hyphae and mould spores and other types of fungi such as mildew. Although they are sometimes found in stored food, they are only attracted by the mould that can grow inside.

Plaster beetles are tiny, and their length can range from 1 – 2 mm in size. They can be found in different colours red-brown, yellow-brown, dark brown or black, and because of their dark colour, they are difficult to spot in a dark environment. Since the wings remain curved onto the back of the plaster beetles, it appears as they have holes in their back.

There are a lot of species of plaster beetles around the world; therefore their features can vary in terms of shape and antenna.

When plaster beetles reach their adult stage, they come out of their hiding spaces and can be removed by simple vacuuming. Some other ways to prevent and trap them are;

The treatment of plaster beetles consists of following steps.

A professional should come in and pinpoint the plaster beetles on close inspection and locations where infestations are found. A professional will advise on how best to prevent the reproduction of plaster beetles in your home by making the conditions for these hygrophilous insects as unfavourable as possible.

Use of Chemical Based Insecticides

The exterminator can apply a granular or liquid insecticide outdoors to prevent the invasion of plaster beetles, or inject a residual aerosol into the voids of the walls, followed by a positively charged boron-based channel, a long-acting fungicide, and an insecticide. Sprays containing lambda-cyhalothrin, deltamethrin, bendiocarb are beneficial. These insecticides are biodegradable, almost odourless and not very toxic to mammals.

Plaster beetle carcasses can be removed by using a vacuum. Areas treated with insecticide should not be disinfected within three weeks, followed by a professional’s visit from a pest control unit to ensure that all adult plaster beetles have been destroyed.