Persimilis, also known as Phytoseiulus persimilis, is a predatory mite. The persimilis mite was introduced accidentally into Germany from Chile in 1958; it was then, in due course, shipped to other parts of the world, including Florida and California, from Germany. A persimilis feeds on two-spotted spider mites, most often known as TSM, and various other spider mite species. It is used most frequently in greenhouses. In addition to that, Phytoseiulus persimilis fits best to provide excellent control of the abovementioned pests in a wide variety of crops grown in moderate environments. These mites are among the list of biocontrol agents used globally. It is because a Phytoseiulus mite is capable of consuming up to seven adult spider mites or sometimes even multiple dozen of their eggs in a single day. Eggs laid by an adult female persimilis mite are oval. Among those eggs, 80% are female predatory mites.

Phytoseiulus persimilis or persimilis is usually small-sized, ranging less than 1 mm in length, that is, 0.5 mm or 0.02 inches for female species. The size of males is different; the immature and male persimilis are smaller in length than the female persimilis. The predatory mite is active at room temperatures. The adult females are orange to light reddish in appearance and are usually tear-shaped. The predator eggs are approximate twice the size of spider mite eggs that they eat up. These small-sized mites are applicable for a wide range of crops. The list of that variety includes berry fruit, capsicums or sweet peppers, eggplants, cucumbers, tomatoes, hops, grapevines, and cut flowers such as rose, gerbera, cymbidium orchids. In addition to that, these mites are also applicable on some tree crops and several ornamentals. Persimilis mites suit best when either used preventatively or when spider mites are first noticeable in the particular crop. 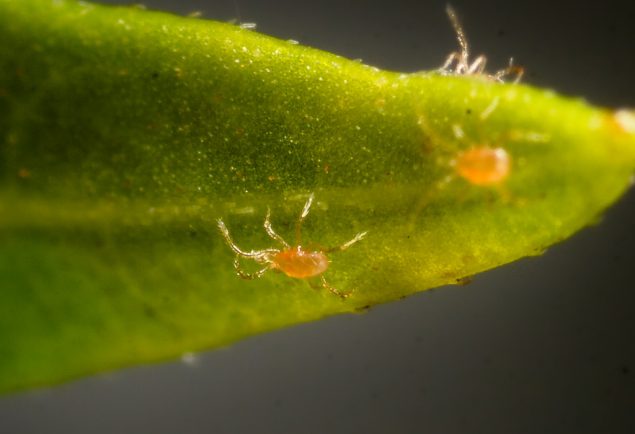 The lifecycle of Phytoseiulus persimilis begins when the adult female mites lay eggs. A well-fed female can easily lay around 50 eggs during her lifetime. These laid eggs hatch in two to three days. The mites cannot feed at the larval stage; however, the subsequent adults and nymphs can on all stages of the prey. The mites can grow into an adult in seven days at an optimum temperature, that is, 70-85 °F or 21-29 °C, living up to a month. It does well when the humidity is at least 60% or above, with a temperature from 55 to 105 °F or 13 to 41 °C. As its origin is tropical; hence a persimilis does not have a diapause stage. The predatory mite is active year-round present in enclosed habitats like greenhouses and interior plant scapes. The minimum possible temperature for the activity of this mite is 50 °F (10 °C).

In- and outbreeding depressions are frequently observed in organisms capable of sexual reproduction exhibiting a patchy distribution pattern, spatial segmentation, or/and isolation of groups. The optimal outbreeding theory states that moderate levels of mate-relatedness should be responsible for providing the highest fitness gains. Phytoseiulus persimilis is a haplodiploid and sexually reproducing mite. The males lose their paternal chromosome set during the process of embryogenesis, dubbed pseudo-arrhenotoky. The females that mate with the males belonging to a similar population can produce usually more eggs; than the females mating with a sibling or male from any other population present around. The mating duration varieties are reasonably long in sibling couples, likely indicating the sub-optimal spermatophore transfer and female reluctance to mate.