Idaho fescue is more commonly known as a blue bunchgrass. It refers to a species of grass, that is, Festuca idahoensis. This grass species is native to the regions of Western North America, spreading widely. However, in California, it is found most often in the Coast Regions and foothills of the Sierra, generally at 4000 ft and above.

The Fescue grass is seen; in many ecosystems, from an open plains grassland to a shady green forest. Its size usually ranges from 1 to 2.6 ft tall and 0.5 ft wide.

Fescue is a long-lived perennial kind of grass with stems of approximately 20 to 80 centimeters in height. The growth rate of this grass is moderate. The grass also bears flowers that bloom during the summer season. It has flowers on it but does not give off any fragrance. The curly spikelets of the flowers later turn into large awned fruits.

Idaho Fescue grass is known to be extensively distributed and dominant in the ecosystem. The fescue grass occupies many diversified habitats. From a general point of view, the altitudinal variations of this grass extend from 984 ft to 13,120 ft. However, fescue may also be found at any elevation between the above-mentioned extremes. However, it is prevalent from 5,000 to 8,000 ft in Montana, 3,000 to 7,000 ft in the Northwest and California, 7,000 to 10,000 ft in Utah and Colorado. It has high adaptability to cold, moderate drought, and moderate shade. Other than that, it is also tolerant of weakly saline, alkaline, and acidic conditions. However, it is not drought tolerant as sheep fescue. 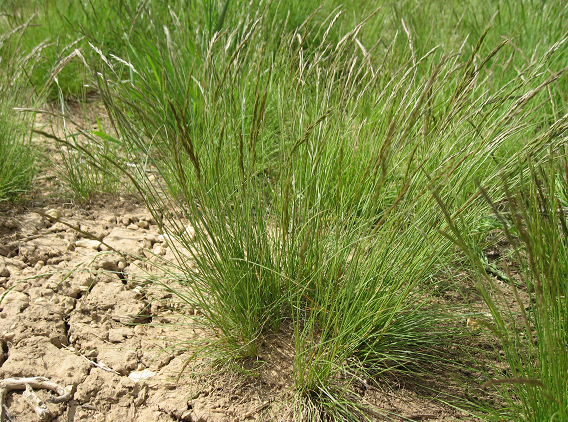 There are many types of grass grown all around the globe. However, they can be identified; by having a glance at their key characteristics. Now, what are those characteristics which aid in characterizing the Idaho fescue grass?

The most distinguishing characteristic of fine grass fescue is their narrow and finely-bladed leaves. Fescue grass is also lighter in color than the usual green grasses grown worldwide. It is okay to blend this grass with both perennial ryegrass and Kentucky bluegrass.

However, for tall grass fescue, the identifying characteristics are a bit different. For instance, it is known to be one of the most durable and flexible grasses grown. Tall fescue grass can be easily identified; by its wide-blade leaves having equally sized veins. No prominent midrib is visible in this kind. It cannot be blended; with any other grass. If left unmowed, it forms a seed head containing six to eight seeds.

Idaho fescue is considered; to be one of the best categories of grass. Therefore, its seeds are of vital importance for growing purposes. Seeds of Fescue grass are commercially produced. From a usual point of view, Idaho does not yield any seeds during the first year of establishment. Rather, the production of seeds takes place gradually over time. To produce the fescue seeds, the grass seed in weed-free, firm, and fertile soil is present at a depth of 0.25 inches. As a result, row spacing of approximately 30 to 36 inches is recommended to facilitate the weed control and rouging of off-types.

Idaho fescue grass offers several uses. The Idaho fescue is considered one of the most excellent forages for wildlife and livestock, particularly vital during the late growing season. It is because it can provide green feed for longer than the other associated species. In addition to that, this kind of grass is not grazed readily right after drying. This species is known to be a prime species of managing orientation in high mountain sites.

It begins senescence later in the growing season. Not only that, but the Idaho fescue grass is also the main grass for elk and sheep in Oregon. It is a significant part of the elk diet, for they consume it from the Rocky Mountain region. The elk and deer typically use this grass as a low-elevation winter range, whereas the pronghorn uses it around. To conclude, Fescue grass is quite valuable from several points of view.