Deathwatch beetle or Xestobium rufovillosum is a species; belonging to the category of wood-boring beetle. This kind of beetle is known to be associated with the timber structures of old buildings.

The emerging time for the males is usually in April, May, June in Britain. Females emerge following the emergence of male species, usually in the afternoon, and are willing to copulate. However, this emergence is only optimum above 10 degrees celsius. Mating takes about one hour to complete in a concealed location. The female beetles lay eggs in crevices in the holes or wood created by the emerging species. After hatching out, the larvae feed on wood and take about two to ten years or even more to grow to a maximum size. Then, they pupate in a chamber after twenty to thirty days.

When it comes to the size of their larvae, it grows up to 11 mm or 0.4 inches long. Their pupa is milky white and shiny; it measures up to 7 to 8 mm in length and width around 3 mm. The pupa consists of the head, fully-developed eyes, mouthparts, antennae, and legs. When the deathwatch beetles reach the adult stage, their size ranges from about 6 to 7.55 mm or in inches, 0.24 to 0.30.

This beetle is usually present in Europe, including the United Kingdom. It is also found in New Caledonia, North America, Corsica, and Algeria. 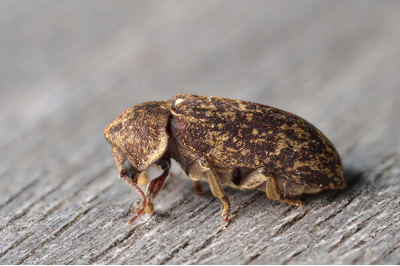 There are some signs which a person may notice while checking out for the presence of any deathwatch beetles. Now, what are those signs which indicate the existence of these beetles?

Their identification inside the timbers is difficult; their presence is indicated by fecal residue(frass) and fresh dust. The older holes are dull in appearance, while the new exit holes are brighter. The species involved may be identified by the fecal pellets in the frass easily.

A direct examination of the timber from the interior destructively is sometimes not acceptable, and non-invasive means are needed. Another means of identifying them is by using highly effective pheromone traps for the commonly occurring furniture beetles. Another sign of their presence is the sound heard with the help of a stethoscope. The adult beetles are attracted to the light so, this may also be a factor in identifying whether the beetles are present or not.

Deathwatch beetles seem to attract many English buildings (because the buildings comprised of old oakwood). As a consequence, these beetles caused a significant economic setback in England.

In the surrounding area, the deathwatch beetles affect indoors and hardwood. Though these species infest hardwood, however, they also can burrow into adjacent softwood.

Other than that, beetles are also associated with infesting hardwood components of the furniture, for instance, an oak. However, their larvae can only ingest wood partially consumed by fungus; for this reason, the infestations are possible only on the woods consumed earlier by the fungi. Generally, the infestations caused by the beetles are visible in the woods exposed to rainwater, leaky pipes, or poorly ventilated areas.

John Wilkins was the person to describe the existence of this beetle in 1668. Following that, Professor Lefroy attempted and came up with a management strategy for these beetles. Though the deathwatch beetles are damage-causing; however, it does not mean that an individual cannot manage and treat them.

Recent studies have shown that applying external insecticides is ineffective, as the beetles are present inside the timbers. For this reason, gas fumigation produces effective results. Since the beetles are attracted to light; therefore another way of treating the deathwatch beetles is to use ultraviolet insectocutors, which attract the beetles and kill the adult species that emerge during the spring.

However, modern examination methods nowadays are also accompanied to localize the beetles with even greater accuracy. In the buildings where this method is acceptable, 6 mm larger holes are drilled deep into the timbers, and a thick insecticide spray is applied.