Centipedes are not insects, although they belong to the family of Myriapods. They have elongated bodies consisting of many segments. Each segment has a pair of legs. The front-most leg serves as piercing fangs for centipedes by which they transmit poison into their prey.

Centipedes are around 7 – 10 inches long, bearing dozens of legs. They always possess legs in odd numbers. They are mostly found in dark and damp areas, but can also survive in dry deserts.

Centipedes can be irritating as they can cause serious health implications for pets like dogs, but are not lethal or fatal for humans.

Centipedes are terrestrial arthropods leading a hidden life in the soil. They are invertebrate animals belonging to the class of Myriapoda. They have flattened bodies that are longer in length. Their body consists of a head and a very long trunk. The trunk consists of many long segments. The head bears a pair of antennae, and the trunk is provided with one pair of lateral appendages per segment. The frontest pair of legs are modified, and centipedes use them as their poison fangs. The head of the centipede also bears a pair of long and sensitive antennae, which are covered with many small hairs. Their small mouth consists of claw-like structures that contain venom glands.

Usually, centipedes have compound eyes which contain about 200 single eyes, while others have simple eyes appearing in clusters. Some centipedes have no eyes, and they use their sensitive antennae to sense their surroundings.

They usually consist of 15 – 177 pairs of legs, with one pair attached to each segment. Interestingly, centipedes always bear an odd number of legs.

The body of the centipede is yellow-brown in color, having stripes all over the body with a comparatively darker color. 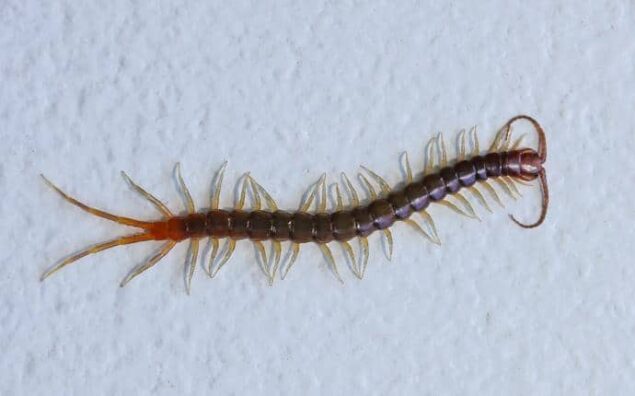 Centipedes contain venom in their venom glands and are carnivorous. They catch their prey by stinging them and make them available to eat. They typically feed on insects and worms. They are rarely harmful to humans but can bite you if you were found irritating them. Centipedes are mostly considered less harmful than being beneficial for lawns. But they may leave an irritating stain where they are crushed.

They usually seek out places that are warm enough so that they can hide inside and seek their prey since they are long and narrow, so they do not need big spaces to hide.

Are centipedes poisonous to humans?

Centipedes are not harmful to humans until you provoke them. But their bite is very harmful and painful as well.

Centipede bites are very painful to humans, but they rarely cause any health complications in human beings. The larger the centipede, the painful it will bite. The sting of the centipede is not considered as dangerous or fatal, especially for human beings, but they are known to use their venom, which is present inside their venom glands, to kill their prey.

The venom of some centipedes comprises different chemicals which can cause severe allergic reactions to people who are allergic to the sting of bugs, wasps, and other insects. They were also found to cause significant cardiovascular and neurologic effects, but they are not considered deadly for humans.

The venom of centipedes contains chemicals like serotonin, cardiac depressant toxin-S, and histamine.

Are centipedes poisonous to Dogs?

Summer season is the most favorable condition for centipedes, during which they can come out of their hiding spaces and can be found moving around your lawns or inside your house, and may affect your dog.

Your dogs may find the centipedes irritating them because their venom is toxic and may cause serious complications. The centipedes may bite your dog, and this can be a cause of toxins prevailing inside the pet’s body.

Some centipedes are very poisonous, while others have the poison of very low toxicity. If your pet gets caught with a centipede’s bite, then it must be treated promptly because if it is not treated on time, the poison traveling inside the body can be lethal and can cause irreplaceable damage.

So if someone asked that if a centipede is poisonous to dogs, then the answer is YES. This condition needs to be treated on time because the bite is itself very painful and can be fatal for your dog as well.

Some dogs only develop some allergic reactions when they are bitten by the centipedes, which does not lead to any severe health implications in some cases.