Harvestmen are arachnids and mostly known for their long and lean legs. They are often confused with spiders due to the fact that both of these creatures belong to arachnids, but they are actually different from each other.

Since they look similar to spiders, they are also thought to be dangerous to humans, which they are actually not.

Harvestman spiders belong to the phylum Arthropoda; class Arachnida is followed by the order Opiliones, which are often found in humid places.

Similar to cellar spiders, they have long and thin legs, so they are also called daddy longlegs or granddaddy long legs.

What is a Harvestman spider?

Harvestman spiders are animals that are often confused with spiders because of their thin and long legs, but they are not spiders. They do not secrete silk secretion to make webs like the spiders do, but they are not as harmful as spiders.

The Harvestman spiders are omnivorous and can binge on different insects like spiders, mites, snails, and plant material as well.

They have four pairs of legs, just like a spider. The tip of their legs has multiple joints with a hook at the end, and the whole legs are covered with tiny hairs. The legs of the harvestman serve as a sensing organ for the animal because its legs are loaded with nerves.

They have pores through which they secrete a smelly liquid, and this helps them keep their predators away. This secretion both smells and tastes bad to their predatory animals. This pore is located at the base of each front leg. 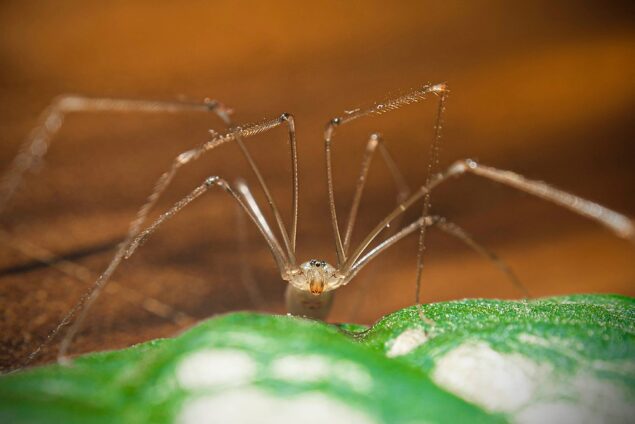 There are more than a hundred species of Harvestmen only in North America north of Mexico. They are named ‘Harvestman’ because they are seen during the harvest season that is during late summer and early fall season of the year, and this is the same season when they mate.

Its body is very small as compared to its legs and is usually half inches long.

Harvestman spiders are often found in crops fields like alfalfa, corn, small grains, potatoes, cabbage, strawberries, and apples. They are found in most pleasant regions of the world.

Harvestmen often appear covered with red, orange, or yellow dots. These are not only dots but are actually mites that parasite over them.

They act as predators as well as scavengers. They are not harmful to humans and do not produce a venomous secretion to harm any of its prey. Their mouthparts are so small that they cannot bite anyone.

However, they are omnivores and are predators to a variety of insects like spiders, mites, snails, earthworms, beetles, caterpillars, and other harvestmen also. Very few of them also feed on fatty meat, bread, and butter.

The eyes of the granddaddy long legs can detect the intensity of light but cannot see images properly, so they use their other senses to detect other animals.

They do not have silk secretion glands to build their web, but they have a special stinking secretion that keeps their predators away from themselves.

They binge on solid food particles, and their secretes special digestive enzymes for its digestion and in-digest the liquid material.

They have a special defensive mechanism, by which they could release a leg from its body to distract its predators and act as a would-be predator. This behavior of Harvestman spiders is called autonomy. Unfortunately, the released leg cannot be regenerated, but the animal can compensate for this loss.

Some of the species of harvestman are parthenogenic, which means that the females can produce offspring obtaining sperms from the male species.

According to the urban saying, Harvestman spiders are the most venomous animals across the globe. On the contrary, they do not have glands to produce venom because their mouth and jaws are so small that they cannot harm anyone.

The female harvestman spider lays her eggs, which are fertilized, in the soil in a protected environment like the space under tree bark, under leaves, etc. These eggs go through six stages before they reach adulthood and undergo incomplete metamorphosis.

In most cases, the eggs are not guarded by the mother and can be kept protected by males and females in both species.