Learn all about vinegaroon spider bite and all about the poisonousness of bite. Vinegaroons are also known as whip scorpions. There are both tailed and tailless varieties. Although they may look formidable, they lack venom and are harmless.

Vinegaroons are a type of spider that look like a cross between a spider and a scorpion. Vinegaroons usually live in the southwest part of the U.S., especially in the desert areas. These creatures are mostly nocturnal and are rarely seen during daylight hours. Vinegaroons are also called whip scorpions, or whiptail scorpions, monikers originating from their close phylogenetic relationship to scorpions plus their long flagellar tail that “whips” around when they are excited. Although accurate scientifically, these common names are unfortunate because they wrongly imply that these creatures can sting or are venomous. They do not have venom, cannot sting, and do not even pinch.

Vinegaroons have a scorpion-like body shape, with their flat, extended abdomens and spiky, clawed pedipalps (those pincer appendages in front of the face), they are not closely related to scorpions at all. As far as we can tell, they are most closely related to things like amblypygids and spiders, and are in a separate subdivision from things like scorpions, camel spiders, and daddy-longlegs, which make up a proposed grouping called Dromopoda.

Vinegaroons are found in the warmer latitudes of North America, throughout Central and South America, as well as subtropical and tropical Asia (and a lone species found in tropical Africa). The center of their diversity appears to be in Southeast Asia. They, in true arachnid form, like to hunker down in humid, dark places, which usually requires clawing out a burrow in the dirt with their pedipalps. Many species are found in forest habitats of varying moisture, but some live in arid habitats. One of these is the largest species of vinegaroon, Mastigoproctus giganteus, with a body about as long as a credit card, which lives comfortably in the desert and semi-arid tracts of the southern U.S. and Mexico, but tends to only, be active during the wetter months of the year.

Vinegaroons are classified as an arachnid, meaning they have 8 legs with an additional two large claws at the front of their body. They also have a long tail-like appendage, very similar to one found on a scorpion, and are usually between 1 and 3 inches long. When vinegaroons bite, they can also release an acid-like spray which is used to help defend against larger predators. Enemies include medium sized mammal predators such as raccoons, cacomistle, coatimundi, weasels, and skunks, ground birds such as roadrunners, lizards, tarantulas, one another, and possibly scorpions. 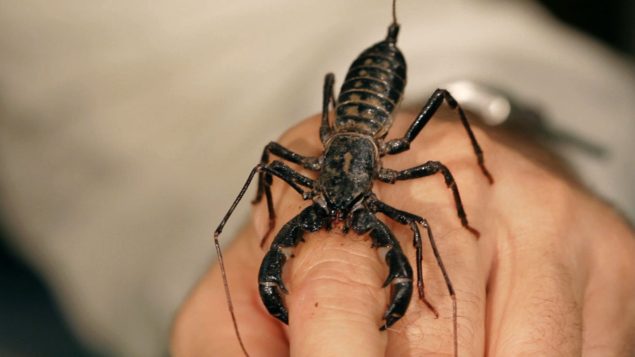 While the vinegaroon spider is a beautiful creature, getting bitten by one isn’t fun. While they aren’t poisonous, their bite can sting a little. They rarely attack humans, and will generally reserve a bite for when they feel threatened. Vinegaroons spider bite symptoms are as follows:

If these don’t subside within a day, or if they’re getting worse, it’s a sign that the bite has gotten infected. This typically won’t happen in young, healthy people

Vinegaroons or whip scorpions are found in tropical and subtropical areas excluding Europe and Australia. Also, only a single species is known from Africa: Etienneus africanus, probably a Gondwana relict endemic to Senegal, the Gambia and Guinea-Bissau. They usually dig underground burrows with their pedipalps, to which they transport their prey. They may also burrow under logs, rotting wood, rocks, and other natural debris. They prefer humid, dark places and avoid light. Mastigoproctus giganteus, the giant whip scorpion, is found in more arid areas, including Arizona and New Mexico.

Vinegaroon spider isn’t venomous. There’s no need to worry about poison getting into your system. If you’re bitten, you won’t need to worry about a toxic reaction. While the bite might sting a little, it’s not going to kill you. You’ll probably feel more pain from the acidic spray getting in your eyes than a bite. A bite from a vinegaroon spider is relatively harmless since they aren’t venomous creatures.

Vinegaroon spider bite treatment is not needed as the bite is not much painful. Since vinegaroons are not poisonous, these bites are not life-threatening. The biggest concern for vinegaroon bites is infection. If the bite was able to break the skin, bacteria, viruses, and other germs may get into the wound and cause infection. Therefore, it is important to clean the bite site with soap and water as soon as possible.