Insects are a very diverse group of organisms existing on the earth. Their species are known to be larger; as compared to any other organism. It is fascinating to note that insects are accountable for approximately 80% of the animal population on the earth.

Symphylans are often confused with the centipedes or millipedes. Though, they show a slight resemblance to them. However, they are distinguishable from them since they are tiny and non-poisonous.

Symphylans inhabit the soil and forest litter, and their percent abundance is very high there. They sometimes are also present in the form of groups deep in the decayed wood, under bark, or various other microhabitats which are moist. 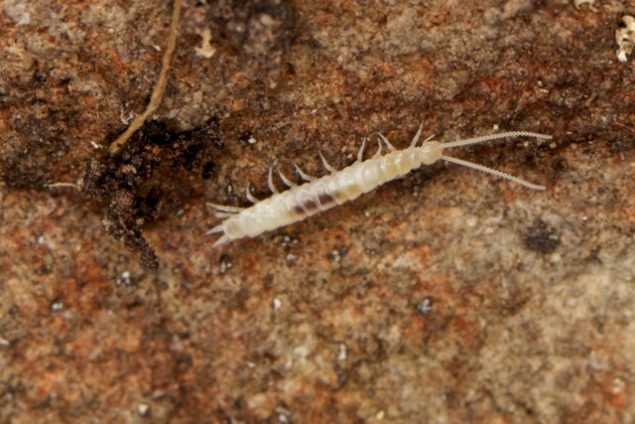 Unlike the centipedes or millipedes, the symphylans are small, translucent, soft-bodied creatures lacking eyes and pigment. Their length ranges between 2 to 30 millimeters. Their body is composed of two regions, that is, head and trunk.

The head carries a long antenna, an organ behind the antennae, and three mouth-pairs. Its flexible movement in the soil is due to 12 segments bearing legs covered by around 15 to 24 tergites. They have three pairs of legs present like any other insect.

There’s one thing interesting about them, that is, additional legs are visible at each molt. They are known to be debris herbivores.

These pseudo centipedes or symphylans sometimes begin to behave as pests and may cause setbacks to livestock, food, and crops. What is the reason that they function as such?

The reason that the garden symphylans may serve as a threat to the crops in the garden is their ability to feed on rootlets and root hairs. It destroys sprouting seeds, seedlings, and also older plants.

However, as the plant increases in size, its ability to damage the crop tends to decrease.

The pitting done by the symphylans in the case of the older roots may also cause pathogens to enter and affect the crop as a consequence. Only, an insecticide that appears to be effective against symphylans included Capture, Vydate, Belay, and Mustang which kill 44 to 95% of garden symphylans.

The point that needs consideration now is; how to control these tiny-sized, blind, and non-pigmented pests to prevent them from causing damage to the crops or plants in the garden? Read below to find that out.

There is either way which may be opted to reduce the probability of their influence. Some of those methods include biological control, cultural control, organic ways that are acceptable, etc.

The main issue of symphylans damage lies in the high organic content present where the soil structure is feasible for them to move. For organic crops, the most reliable method is to pack the soil surface once the plantation proceeds. That is how the control of these tiny-sized pests occurs.

How to monitor and treat the Symphylans after you get to know of their presence? Right below, a simple sampling plan is explained by one of the researchers at Oregon State. This method has proved to be equally efficient and easy to perform and gather results.

Take a potato, cut it into thick slices and place it on the soil surface, which seems to be carrying any moisture. Remember to be cautious when removing the dry soil. Do not disturb the pores so as the symphylans reach the bait.