The botanical name for Golden Moneywort is Lysimachia nummularia, and it is a member of the Primulaceae family. Plants of the same genus are found all over the world, but this one is native to Europe and is now naturalized in the United States. The species name means “like a coin” in Greek, describing the golden flower. Other names for this plant are Golden Creeping Jenny and Moneywort ‘Aurea’

Plants of the genus Golden Moneywort are perennials that spread rapidly across the ground. Its comparatively thin texture distinguishes it from garden plants with rougher foliage. The golden moneywort’s lime-green foliage complements the leaves of the other shade plants.

This plant needs periodic care and upkeep, and only minimal trimming to remove dieback or other abnormal growth. It is an excellent option for bringing bees to the garden or backyard. The following landscape uses of Golden Creeping Jenny/Golden Moneywort are mostly advised:

Golden Moneywort reaches a maximum height of 2 inches and a width of 24 inches at maturity. When grown in masses or as a ground cover, individual plants are spaced around 18 inches apart. Its foliage is typically dense and low to the ground. It develops quickly, and ideally, it is anticipated to live for around 10 years. This plant is a herbaceous perennial, which means that each winter it typically dies back to the crown, and then in the spring it regrows from the base. The golden moneywort is not only a great option for the yard but also for outdoor containers. 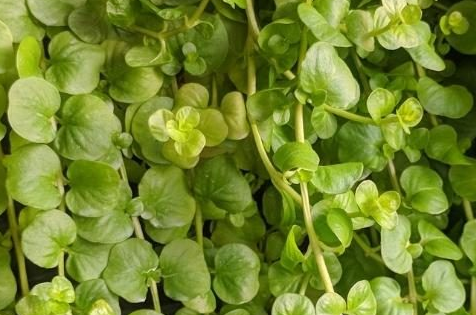 The Golden Moneywort is a plant that is propagated by the use of its seeds. This plant is a creeper because it forms roots at the nodes of its leaves when it touches the ground. It is possible to propagate this plant even from stem cuttings.

This fast-growing creeper is multiplied by seeds and by spring and fall divisions of the plant. A little portion with roots readily forms a new clump, making it invasive. The plant with golden leaves, on the other hand, exhibits a lower level of vitality compared to its parent plant with green leaves. It is also capable of growing in containers and withstands some amount of foot activity.

The optimal conditions for Golden Moneywort growth are full sun. The leaf color is at its peak when grown in direct sunlight. A variety of soil types are appropriate, as long as they are rich, wet, and well-draining. This plant is able to handle some dampness, so it is a good choice for muddy areas where other groundcovers do not work. It is not allowed to dry out throughout the summer, especially in a place that receives direct sunlight. Moneywort’s capacity to spread as a groundcover is greatly hindered by dry circumstances and poor soil, although it is able to adapt to these conditions when necessary.

Moneywort is commonly referred to as Creeping Jenny, and vice versa, however, the two plants are not identical. The reason creeping jenny plants are also known as moneywort is because of their tiny, shiny, coin-shaped leaves. Herb twopence and twopenny grass are uncommon names.

Golden creeping Jenny is also known as moneywort because of the way the leaves resemble little coins. It belongs to the Primulaceae family and can survive in USDA plant hardiness zones 4–9. It is frequently mistaken for creeping Charlie, an additional invasive yard plant. Creeping Jenny is a well-known nitrate indicator and easily absorbs excess nitrate in a planted aquarium. This plant produces little yellow flowers under favorable conditions. In warm regions, the plant is used as a ground cover, and in cooler regions, it is cultivated as an ornamental hanging plant.