The University of Minnesota introduced the cold-hardy early-season pear known as Summercrisp for usage in cold locations where most pear cultivars do not thrive and frequently do not bear fruit. This particular type is the product of hybridization between different species. The summer crisp pear tree (Pyrus communis ‘Summercrisp’ in botanical terms) yields fruit at the end of summer, significantly earlier than the typical pear tree. The flesh of summer crisp pears is significantly harder than that of ordinary pears, resulting in a pleasant crunch when biting into it.

Summercrisp Pear fruit ripens early to mid-season and is green with a clear red blush. The fruit is likewise incredibly sweet and crunchy. The texture is firm and crisp, while the flavor is somewhat sweet and slightly tart. They are only suggested for fresh consumption. The Summercrisp Pear, like an Asian pear, features a firm, crisp feel like an apple, whereas most pears become soft and grainy as they develop. This fruit is ideal for those who enjoy the flavor of pears but dislike their typically mushy texture. 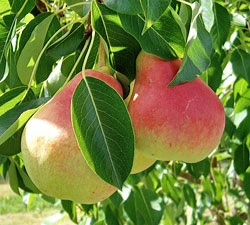 The Summercrisp Pear reaches a height of 15 feet and a width of 10 feet at maturity. As a result of its size and spread when fully grown, this tree is normally grown in a specific region of the yard. Sunlight is essential for its growth. It prefers ordinary to uniformly wet environments, but cannot withstand standing water. It grows well regardless of the soil’s acidity or composition. The plant is able to survive and even flourish in extremely polluted urban settings.

In most cases, a single summer crisp pear tree is not able to set fruit on its own because the tree lacks the ability to pollinate itself. Instead, a matching pollinator plant is planted close to allow for cross-pollination. The gardeners mostly utilize several different kinds of pear trees for this purpose, including bartlett, comice, and bosc pears. To ensure a good pollen transmission, it is advised to put these trees 50 feet apart.

Cross-pollination is necessary for Summercrisp pears, but the high-quality pollen they generate makes them a good choice as a pollinizer for other pear varieties. The Summercrisp tree yields pyriform fruit on several spurs. The diameter of the fruit ranges from 3.2 to 3.2 inches, while its length is between 3 and 4 inches.

It is impossible for the summer crisp pear tree to rely solely on the movement of the wind to disperse its pollen efficiently. Summercrisp pears, on the other hand, can’t transfer their pollen between trees without the help of a swarm of insects. This plant attracts several pollinator species when in bloom. By placing the summer crisp pear adjacent to the plant that serves as its pollinating companion, it becomes much simpler for the insects to carry out their crucial function.

Summercrisp pear trees require full sunlight and well-drained soil to thrive. After identifying a suitable spot, dig down just far enough so that the plant’s root flare is barely above the soil level. In addition, the width of the hole is roughly equal to that of the root ball. Allow at least 10 feet of space in all directions for your summer crisp pear tree to attain its full form. Some types of pear trees are suited for growing in tiny areas or pots and are winter-hardy in USDA Plant Hardiness Zones 3-10. This particular pear variety, the Summercrisp pear, is grown in USDA plant hardiness zones between 4 and 8.

The Summercrisp Pear tree is mostly grown for its fruit because of its delicious flavor. The name of this cultivar indicates how quickly it is harvested. It also indicates that the fruit tastes best when firm and crisp. It bears chartreuse oblong pears, also called pomes in the botanical sense, with a red tint and white flesh, which are typically suitable for plucking in the late summer. The pears are both delicious and crunchy, with a subtle sweetness.

Pears are commonly used for the following purposes:

The common pear is typically grown primarily for its fruit output, not as an ornamental, although its early spring blooms are gorgeous and the fruit is attractive. It is applicable in espaliered practice. Summercrisp pears are mostly used as edibles, but they are also used as an accent, shade, orchard, and edible landscaping.