There are a variety of insects all over the world. Some are wood borers, some feed on decomposing animal feces and carcasses, some binge on other insects, some like to eat food sources, etc. There are two kinds of beetles who binge on grain or food particles. They are Drugstore beetles and cigarette beetles, and they both are very similar to each other, despite that drugstore beetles have 3-segments on each antenna. They are not harmful to humans because they do not bite, and their food source is only from different grains and other foods.

The pantries and kitchens should be kept clean and dry to avoid them.

What is a Drugstore beetle?

It is a tiny brown-colored, cylindrical-shaped beetle, which is also known as bread beetle or biscuit beetle. They are mostly found in warmer regions of the world. They feed on to food particles and reproduce in them as well.

Drugstore beetles are not as harmful to humans as other insects. Luckily, they do not bite us and only concentrate on the food particles and different food sources either from the kitchen shelves, food storage containers, etc. 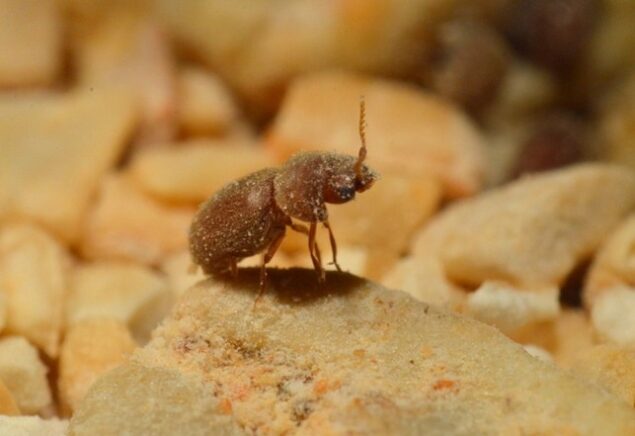 Prevention is better than cure, and one can relate this very well in order to get rid of these Drugstore beetles. Since they feed and grow on food sources, therefore you must keep a check that food sources should be properly closed, pantry, and food selves should be cleaned. Food should be stored in glass containers, and lids must be properly closed so that no air or moisture can build up any incoming gateway for Drugstore beetles. Rotate food stocks very often and never mix new food stock with the old one until the containers are washed, dried, and screened again. Whenever these beetles manage to invade your food storage, then the best you can do is to put the grains or any food which has been invaded, into direct sunlight or in a microwave oven for some time. This will remove any beetles present inside, but the food is still not edible.

You can use Pheromone traps, which trap and catch male drugstore beetles, and this will eliminate the further reproduction of drugstore beetles. Only a few traps can do wonders in your kitchen or pantry.

Drugstore beetles prefer to live in warmer regions. They can live anywhere wherever shelter is available with a higher degree climate. They tend to lay their eggs on food surfaces, which can, later on, become food sources for their immature offsprings. The female Drugstore beetle lays her eggs in numbers ranging from 80 -100 eggs in one time. These eggs within 8 – 10 days hatch, and cream-colored larvae can be seen. The larvae are “C” shaped and are usually 5 mm in length. The typical larva stage is for the duration of 4 – 20 weeks. After that, it transforms into a pupa, which after about 12 – 18 days, becomes an adult.

The lifespan of an adult Drugstore beetle is about 13 – 65 days, and the entire life cycle can be as short as two months or as long as seven months. The duration of the transformation of the egg into an adult generally depends upon the available food source for the immature, warm environment and humidity.

The female Drugstore beetle is responsible for the reproduction of new generations. She lays as many as 80 – 100 eggs in one time. She lays her eggs on the food sources. The eggs are pearly white in color and are difficult to see through the eyes because of their appearance.

Drugstore beetles are often confused with cigarette beetles because both the Beatles are cylindrical in shape. Both of them are reddish-brown or dark brown in color. But Drugstore beetle can be distinguished from other of its kind by the following factors.

● A Drugstore beetle has a pair of segmented club antennas. There are three segments on each antenna.

● The wing covers of the Drugstore beetle, which are also called “Elytra,” possess deep pits which give them a lined appearance.

● The wing covers of drugstore beetles also have fine hairs that run down through the complete length of the wing cover.

● The larva of the Drugstore beetle is similar to that of the cigarette beetle, but it also has fine hairs all over its body.