Crane flies belong to the family of Tipulidae of the order Diptera. They are also called mosquito hawks. They are similar to mosquitos, although they are not mosquitos. Similarly, they are not as harmful to humans and animals as mosquitos. They have a thin body that looks like a mosquito but what makes them different from mosquitos are their long legs.

They are usually found near rich water and vegetation areas and depend on humid regions for breeding. A female crane fly drops numerous eggs on a moist surface. These eggs then convert into larvae which are later covered with thick skin. Due to the thick skin of the larvae, they are also called leather jackets. The larvae eat rotting plant tissues before entering the pupa stage. The larvae transform into the pupa stage during spring. The pupa then emerges as an adult fly in the mid of the coming summer.

Crane flies are often called super-sized mosquitoes. The easiest way to differentiate between a crane fly and a mosquito is by size. A mosquito is relatively minor in size than a crane fly, measuring about 0.25 to 0.5 inches in length. At the same time, the size of a standard crane fly is between 1 – 1.5 inches in length. Some crane flies are exceptionally bigger than the rest of them and reach a height of about 3 inches when fully matured. Another distinguishing feature of crane fly is that they have a thin body with a V-Shaped abdomen and long legs. This body shape makes the flight of the crane fly a difficult one, and due to this reason, they are also called poor fliers. Crane flies usually wobble in the air, whereas mosquitoes being smaller, can quickly move from one place to another when flying, and that too even faster than a crane fly. 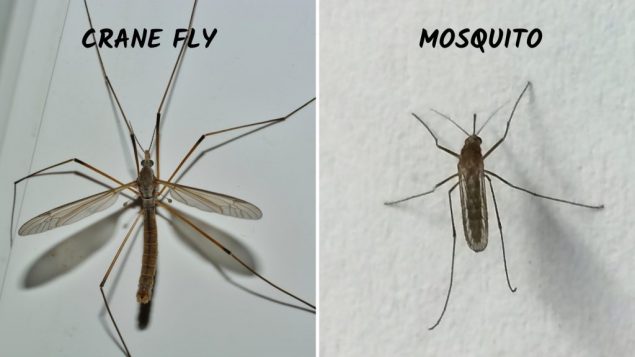 There are more differences between crane flies and mosquitoes than similarities. The most significant difference between them is their sting. The female mosquitoes live by sucking the blood of humans, animals, and birds also. They need blood to lay eggs and fulfill their requirement of lipids and proteins. A male mosquito feeds on plant nectar only. Mosquitoes are also able to carry diseases, like dengue, malaria, etc. On the other hand, crane flies are not harmful to humans and do not bite humans. Crane flies only feed during their larvae stage. Adult crane flies also do not transmit diseases.

A crane fly has four stages in its life cycle.

Eggs: When a female crane fly becomes an adult, it lays eggs right after a day. The adult crane fly lays eggs during the late summer season.

Larvae: The eggs are then hatched into larvae. The larvae may be of different colors and body structures. The color varies from green to brown, and they can be thin-bodied or may have a plump body with a clear head.

Pupae: During the spring season, the larvae will transform into pupae.

Adults: The pupa will become a fully matured adult by the end of the summer or fall.

The lifespan of an adult crane fly is 10-15 days only.

The life cycle of a mosquito is also divided into four stages:

Larva: Once the eggs come in contact with water, they start to hatch, and larvae come out. These larvae feed on microorganisms present in water.

Pupa: The larva of mosquito moly’s three times before converting into a pupa.

Adults: After 2-4 days, the pups of the mosquito will transform into fully mature adults. The adult male mosquito will feed on nectar while the females feed on blood to produce eggs.

Both the crane fly and mosquito have the same number of stages in their life cycle. The larvae stage of both of them has no significant difference.

The larvae of the crane fly are hatched from an egg. The crane fly larvae differ in color and body shape; they can be green or brown and may possess a lean or fuller body with long and thin legs. On the other hand, the larvae of the mosquito do not differ from each other like those of crane flies. They feed on the microorganisms present in water.