Hairy bittercress weed or Cardamine hirsutais is a kind of winter pest or an annual spring. Bittercress weed exists in moist areas around the globe. It is a biennial species belonging to the family Brassicaceae. Its leaves are edible and eaten raw. It is served in salads and other tender parts are also cooked.

In 1889, a book named ‘The Useful Native Plants of Australia’ mentioned a bitter weed as “Lady’s Smock”. Not only that, but it also indicated its affordability as excellent pot-herbs when flaccid and luxuriant. Once established, eradication of a bittercress weed becomes difficult. It is grown in damp soil, turf, open ground, and waste places.

The germination of seeds of a Bittercress weed takes place in September in the fall beginning. Its true leaves at the beginning are heart-shaped, followed later by compound leaves having a kidney-shaped terminal leaflet and two or more pairs of leaflets.

Leaves emerging in the fall tend to form a rosette capable of overwintering. During the weather changes in spring, it exhibits white and small flowers, followed by siliques or slender seed pods. After the ripening of these seed pods, the seeds propel as far as 16 feet from the mother plant. The seed dispersal process adds to the soil bank and occupies the area for another infestation that emerges during the early fall. Right after the placement of seeds, the life cycle of a bittercress weed completes and the plants die eventually. Weeds like bittercress weed, common chickweed, and purple dead-nettle are not evident during the summer months. 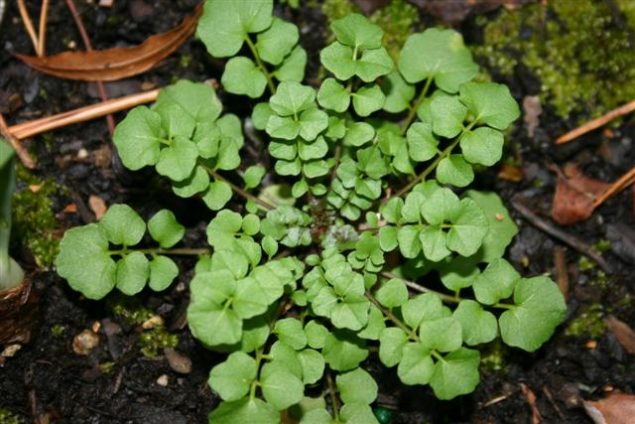 There are some characteristic identification clues for the existence of this weed. Identification of this weed is not a difficult task. Bittercress grows in a compact, basal rosette form, that is, radiation of leaves around the base. Each leaf stalk consists of 5 to 9 paired leaflets that are kidney-shaped.

A bittercress sends flower stalks up after establishing. Its flowers are tiny and white. After the ripening, even the slightest touch induces the popping and shooting of numerous seeds off in every direction. This factor is what makes them hard to control in the garden.

Hairy bittercress weeds are usually short-lived plants, having shallow root systems that respond readily to cultivation or hand-weeding. The species of bittercress may be easily hand-weeded by taking into consideration their characteristic root system. The pulling out of it usually leaves roots behind. Consequently, the plant re-sprouts from healthy weeds, and the problem continues. A weeding tool is also used to dig down around the taproot, eradicating all the plant material from the ground.

Over time, mowing will be achieved. Remove the flower heads frequently before they change into seed pods. As the temperature in the surrounding area of the weed rises, the plant naturally dies without reproducing. It means that fewer weeds exist the following season. The other option required by most of the severe infestation; is the application of chemical methods to prevent the propagation of a hairy bittercress weed.

Chemical procedures involve the use of killer or herbicide. The herbicides are applied; after the emergence of the species. It needs to have certain ingredients. The ingredients must be 2-4 D, triclopyr, clopyralid, dicamba, or MCPP. These mentioned ingredients are seen in broadleaf herbicide preparations, referred to as two, three, or four-way treatments. What does this preparation number mean? The higher preparation number of a herbicide enables it to kill a wide range of weeds. The application of chosen herbicide must take place in fall or spring.