The European Gypsy Moth (Lymantria dispar) is an invasive forest pest that was introduced accidentally in the United States in 1869. Since then, the Gypsy Moth has expanded its range over much of the eastern United States and Canada.

It was first detected in Ontario in 1969 and has quickly spread across southern Ontario over the next decade. It is now well established throughout southern Ontario and as far north as Sault Ste. Marie.

Gypsy moths feed on a broad range of trees. Oaks, poplars, willow, birch, white pine, blue spruce and many fruit trees are all at risk for defoliation when gypsy moth populations are high. Defoliation of trees and forests was a common occurrence from 1985 to 1999 as this exotic moth spread across Michigan, without the natural controls that keep native species of caterpillars in balance. A few parasites, predators and a viral pathogen were known to attack the gypsy moth larvae, but did not keep populations of gypsy moth down for long.

Oaks are the caterpillars preferred trees, but gypsy moth caterpillars have quite a large menu. They can feed on over 300 species of trees and shrubs. Other preferred hosts can include poplar, birch, witch hazel and alder. The strong smelling roots of some tress and spices such as garlic, onions, horseradish, ginger, rhubarb leaves, cayenne and other hot peppers, are all known to repel insects. 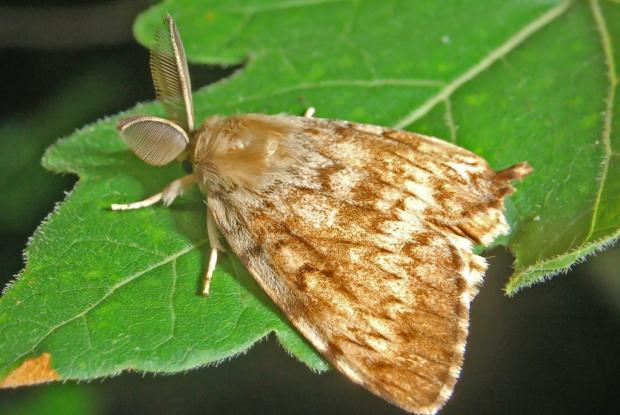 What are Gypsy Moths?

Gypsy moths are an invasive insect that, as caterpillars, have hairy bodies dotted with blue and red spots. When they hatch, they’re only about one-sixteenth of an inch, but can grow to be more than three inches long by the time they form cocoons about six weeks later.

This can be purchased at most garden centers, and it also kills gypsy moth caterpillars. Caterpillar Killer with B.T. is a safe, easy-to-use and effective control for caterpillars including tent caterpillars, gypsy moths, spring and fall cankerworm, Spruce budworm, Jack Pine Budworm and other insects which infect shade trees, ornamentals and evergreens. It utilizes Dipel (Bacillus thuringiensis var. Kurstaki) which, once ingested by the wayward caterpillar or worm, kills them within a few days.

Horticultural oils for gypsy moths are also available. The horticultural oils are mainly refined petroleum products. More recently the list has expended to include extracts from the seed of the neem tree (Azadirachta indica) and some vegetable oils such as cottonseed and soybean oils. The horticultural oils or “dormant” oils as they are often referred to, can and should be used as very effective control materials for insects that overwinter on the bark, under bark scales, in crevasses, etc.

The unsulfonated residue or degree of refinement to remove sulfur impurities of 92% and above is preferred. The higher the percentage the more refine the oil. These highly refined oils are known as “Superior Oils.” There are several trade names for them like, Sun Ultra-Fine Oil, Sun spray, Superior 70 Oil, Supreme Oil, Trilogy (neem product), etc.