The banded tussock moth is termed as pale tiger moth (Halysidota tessellaris). This species of moth was first described; by James Edward Smith in 1797. Similar to various other related species, adult moths have well-developed chemical defenses acquired from their host plants, alkaloids, in this case. The larval behavior depicts that they are protected chemically and are usually not analyzed for alkaloid content. This kind of caterpillar is highly observable even though it is alone. The banded tussock moth caterpillar is highly active from mid-summer through the autumn season and feeds on deciduous trees such as birch, tulip tree, willow and oak. A moth caterpillar forms a hairy cocoon and resides inside it during winter. The cocoon resembles an egg-shaped wad of wooly hair. The caterpillar tends to crawl and rest on the topside despite the eggs laid on the bottoms of leaves.

The majority of people safely handle this caterpillar. However, the skin of some people is sensitive to its contact. In general, banded tussock moth caterpillars do not harm most handlers compared to other moths with ‘tussock’. The bristly and bushy body comes in multiple colors like grey, white, yellow, orange, or rusty brown. It has two pairs of long pencil-like lashes in white and black with the head extended forward, in front of the face. The head of a banded tussock moth caterpillar is black and has a dark line that runs down the length of the spine present. Adolescent caterpillars may have yellow or white hues and have more distance between the bristly hairs, like the pipe cleaners. 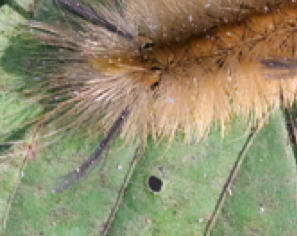 The life cycle of a moth caterpillar begins when eggs are laid in masses on the undersides of leaves. The color of larvae varies from orange and yellowish to dark grey. Caterpillars usually rest on the upper region of leaves and are conspicuous. The larvae can grow up to 35 mm in length. When these larvae reach the adult stage, the wings become light brown and forewings having bands of beige are edged; in black. The body is hairy and yellow; the thorax has blue-green lines. The adult caterpillars are attracted to decaying plants with pyrrolizidine alkaloids and acquire defensive chemicals consequently.

The tussock caterpillars were abundant in Maine in 2011 and were known as itching species due to the hairs on these caterpillars causing itchy rashes. Prickly hairs are not venomous and serve defense purposes.

Children are usually more susceptible to it than adults as it is natural for them to play with them and handle these caterpillars due to fascination. Rashes due to some members of this group usually tend to be short-lived. For this reason, these are cleared up; on their own after a couple of hours. The rash caused by hickory Tussock may be severe and lasts for a long time. It is then necessary to consult the doctor to speed up the recovery and ease discomfort. Another member of this group associated with itching is the browntail moth. The banded tussock moth caterpillar is usually identical to another tiger moth bearing a tussock named the Sycamore moth.

Several bugs, parasitic tachinid flies and predatory beetles keep the moth caterpillars population low. A caterpillar-specific nucleopolyhedrovirus may quickly reduce tussock moth populations. When killed by the virus, the larvae hang limply from twigs. When working on these caterpillars, it is essential to wear clothing and chemical-resistant gloves that well-covers skin. The inhalation of any caterpillar body parts also needs to be avoided.