Anobiid or powder pest beetles refer to a group of seventy species of woodboring beetles, categorized in the insect sub-family Lyctinae. The Anobiid beetles in addition to various other beetles such as spider beetles, deathwatch beetles, common furniture beetles, skin beetles, and others, constitute the superfamily Bostrichoidea.

Beetles are mostly found in nearly all kinds of habitat, that is, coastal and freshwater habitats. The true anobiid or powder pest beetles are found; in dried and dead hardwoods, such as limbs of trees and dead branches. The other species are also found; in timber, composed of softwood, which may include studs, sills, beams, subflooring, joists, and plywood. These beetles do not bite or infect individuals hence these are usually not dangerous to people, but; these are considered as; a threat when it comes to the woods, where they reside. It is dependent on the species, age and type of the wood these beetles affect.

The life cycle of an anobiid or powder pest beetle begins with an egg that grows into a big-sized adult. The time taken by an anobiid beetle to reach adult size is approximately one to three years. The first step of the life cycle of this beetle is; the laying of eggs, preferably in old beetle exit holes, underwood splinters, or cracks. The next step following the laying of eggs is hatching out from eggs. Once the hatching gets done, the larvae start to feed and turn into a large-sized adult beetle. The adult beetles leave behind exit holes sized up to one-eighth in diameter. The adult powder pest beetles can fly; however, they prefer laying eggs within the same wood from; where they exited. An adult-sized grown anobiid beetle is either brown or black whereas the larvae are lighter in appearance. 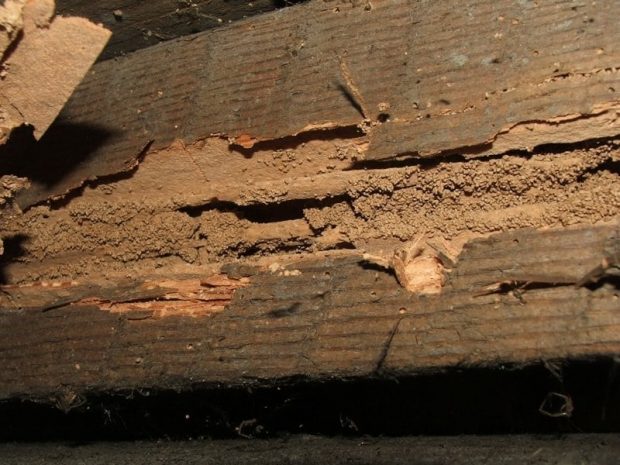 There are some characteristics associated with the anobiid beetles which make their identification easier. An adult-sized powder pest beetle is approximately 3 to 6 mm in length and is tube-shaped. The color of this kind of beetle varies from dark brown to reddish-brown, with a few species appearing almost black. However, the larvae of this beetle are C-shaped, having a white color. The larvae are usually wider at the front than the back of the body.

The head of an anobiid beetle comprises a pair of clubbed and short antennae that distinguishes this beetle from other beetles with a similar shape and size. The powder pest beetle is considered as; one of the strong fliers because it is equipped with two pairs of wings. An anobiid beetle holds a high capability of turning tons of wood into powder form.

As mentioned earlier, anobiid beetles do not cause much harm to humans. However, these beetles cause a significant setback to the woods. The first damage caused by the anobiid beetles is that they cause numerous small holes on the wood surface. The size of these tiny holes is; the same as the size of a pencil tip, that is, 1 to 3 mm in diameter. The margins of the exit holes of an active infestation are sometimes white or the color of the exposed underwood portion. However, for an inactive infestation, the margins are either dark color of the wood or blackened; the consistency of the grass assists in the determination of the specific beetle type responsible for the damage. The frass caused by the true powder pest beetle is usually powdery and light, unlike the grainy one.

The treatment of an anobiid beetle depends upon the severity of its exposure to the wood. Now, what does that mean? It means that those infestations of the beetle are limited only to a small area, or a single object can be prevented; by removing the infested wood. However, if the exit holes are apparent in other areas also, an additional treatment becomes mandatory. The homeowners treat the beetles by the use of several insecticides. Treatment formulae consisting of borates are best as they can penetrate inside the wood to eliminate larvae present inside. If the infestations continue to occur even after the use of insecticides, consult a pest control professional to take necessary precautions into charge.