For many years microencapsulated products have been used due to their stunning qualities and long-lasting effect. Nowadays, the demand for these products has again increased constantly as a great number of pesticides have been found everywhere. Even Pest Control Companies love to use this pesticide as it is less harmful as compared to older pesticides. Onslaught is one of the most common microencapsulated pesticides that is now being recommended by most of the experts. So, to know all the relevant information regarding this pesticide, you are suggested to read this whole article.

What is Onslaught insecticide?

Microencapsulated pesticides are those pesticides in which the active ingredient is being coated or covered with polymer for protection. The coating material is usually starch, plastic, or some other material. Onslaught insecticide is odorless and one of the microencapsulated pesticides, which can terminate almost all types of pests, including the toughest ones. This pesticide has creamy or yellow/ brown color. It is required to be mixed with water in the spray bottle. This effective pesticide is long-lasting and can be applied everywhere where pests might be found. The active ingredient used in this insecticide is Esfenvalerate. 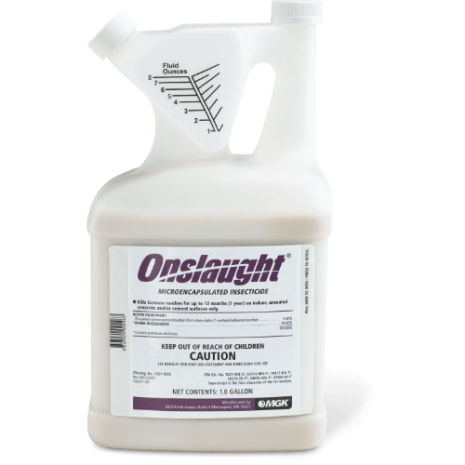 Before using any hazardous chemical, make sure to read the label of that product carefully and follow all the necessary first-aid tips. All the precautionary statements for safety mentioned on the label of the Onslaught insecticide are listed below.

● If someone accidentally swallowed this poison then, consult with your doctor immediately.

● Take off all those clothes that are contaminated with this poison.

● If the poison accidentally goes inside your eye, then hold the eye open and rinse with water gently for a few minutes.

● Make sure no animal or bird is in the surroundings when you are spraying this pesticide.

● Place this pesticide out of the reach of children.

● Do not apply this pesticide near the food or feed areas.

● When you are using this pesticide indoors, make sure the rooms are empty and not filled with people.

● As this pesticide is water-based, be careful and do not use it near electrical circuits and other electrical appliances due to shock hazard.

● While using this pesticide, make sure you are wearing a mask and all necessary clothing to protect yourself from any harm.

The reviews on Onslaught insecticide have mostly been positive as this unique pesticide is long-lasting, very economical, and highly effective. People are quite happy and satisfied after using this pesticide. Although some critics have complained that this product was not successful in terminating bird mites and rat mites, it is also toxic and can give you a chemical burn. Some people also complained that this product is not worth the price. Well, those people who do not get the expected result may not have followed the instructions properly, but overall the rating on this pesticide is satisfying. The majority of people have rated 4 out of 5 stars in the rating section of this product.

Before using this pesticide on a particular place, add this encapsulated pesticide in water and shake the spray bottle vigorously. Before use, do not forget to clean the spray bottle. Dilute 0.50 fluid ounces of Onslaught per gallon of water for a small population of insects is favored, and dilute 1.0 fluid ounces of Onslaught per gallon of water is suggested for those insects that are hard to knock out; after making this mixture apply this pesticide to those places where pests are usually found such as doors, near windows, near garbage, in attics, in walls, ceilings, cracks and fissures, and all those places where these nasty creatures are resting.