Camellia Leaf gall is an early spring disease that affects azaleas and camellias. Other members of the Ericaceae plant family are also affected by this infection. It can be found in residential gardens and nurseries.  The fungus Exobasidium is responsible for the spread of this disease. Galls on camellias appear in the early spring, turn brown, then fall off the plant on their own by late spring to early summer.

Leaf gall is a frequent plant disease that affects Camellias in particular. Camellia sasanqua cultivars are particularly vulnerable to disease. A fungus causes leaf galls, which can harm the plant’s appearance as well as flower development. Camellia leaf gall disease is easily visible.

The white spores begin to appear as the fungus spread among the leaves. The tissue attached to the back of the affected leaves becomes weak and is removed to prevent other leaves from the disease. The spores can be disseminated by wind or splashing water in the garden or among the other unaffected leaves or stems. It is advisable to remove the infected leaves and flowers to avoid the disease from spreading all over the garden. 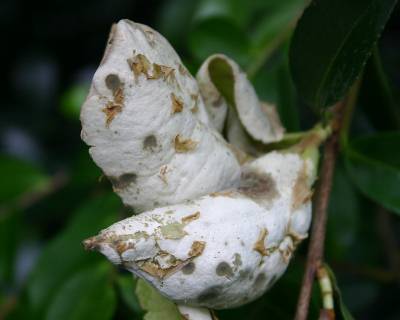 Gall is a type of plant tissue that grows abnormally. Initially, the disease is identified by little dots on the leaf or stem. The color of the leaf changes gradually with the fungal growth. When a plant is infected by a fungal spore, gall develops as a result.

Camellia leaves are typically dark green, narrow ovals with serrated edges but length and texture may vary. The Camellia Leaf Gall affects the color and texture of the leaves. The leaves become fleshy and thick with an orange peel surface. The impaired leaves also appear pale green on occasions.

The infected leaves appear different from other healthy leaves in the garden. They appear creamy white colored and are easily detected by the gardeners. The tips of the affected leaf begin to swell and its identification is quite easy.

Leaf gall, often known as edema, is caused by fungus under extra moist conditions. The undersides of the leaves get larger and sticky, with microscopic greenish-white galls. The leaves ultimately become rusty brown in color.

The Camellia Leaf Galls are often seen during the spring growth period. New branches and leaves expand, thicken, and flesh out, giving an unnatural appearance. The damaged parts change the tone from pale green to pink or white. The galls on the undersides of the leaves burst later, revealing a creamy cluster of spores. The galls become stiff and turn brown with time. The problems faced by the Camellia plant are mostly related to the look of the plant. This disease is not considered life-threatening for the plant.

It is advisable to throw the affected leaves away before spores formation. This is one of the treatments for the Camellia Leaf Gall. The Leaf Gall infection can be treated by keeping the Camellia plant clean and healthy. It can be planted in acidic, well-drained soil.  To protect fresh leaf scars against infection, fungicides such as copper-based fungicides or thiophanate-methyl can be sprayed during rainy times and regular leaf drop periods.

The best control is sanitation. All diseased flowers should be removed and destroyed. All leaves, blossoms, and plant detritus found in the garden should be picked up and removed.   This fungus can be found in the soil. The fungus’s spores can travel up to a mile in the wind before being picked up.

Hand plucking and destroying or burying the galls can be used to control the disease in small areas such as a greenhouse or in a home garden. To avoid new bacterial infection, it is critical to pick the galls prior to the appearance of the white spore layer.   In most cases, fungicide treatment is unnecessary in residential landscapes. During commercial operations, it may be necessary to combine manual picking of the galls with the use of an antifungal pesticide containing the active component mancozeb in the early spring before fresh galls develop.

The Camellia plants can be prevented from catching the infection by pruning. It is advisable to the gardeners to prune the plant regularly. This will let the sunlight and air reach each side of the plant. The owners of the garden or the plants must catch the disease early on before it becomes a serious problem.