Margarita Bop or Penstemon heterophyllus is commonly known as bunchleaf penstemon, foothill penstemon, and foothill beardtongue. It is a species of penstemon that is endemic to California. This plant is present in nearly all of the coastal ranges and the northern Sierra Nevada foothills.

The Margarita bop plant grows in various habitats, such as grasslands, hillsides, open oak woodland, chaparral, and forest areas. It is a perennial herb by nature; that produces branching and upright stems, becoming woody from the bases. The leaves are not of a particular shape and vary from each other.

The inflorescence of a Margarita bop is capable of producing tubular flowers that are wide-mouthed. The color of flowers produced may belong to any shades from blue or purple to nearly Magenta. A Margarita bop plant is used to serve ornamental purposes in plant nurseries. The plant is also a nectar source for butterflies and birds.

The size of a Margarita bop perennial herb ranges between 1 to 2 feet in height and 2 to 3 feet in width. The size of its leaves is approximately 10 centimeters long, and the size of the tubular flowers is nearly 4 centimeters in length. The Margarita flowers work well in several situations, that is, in masses of a bank, a rock garden, and also as a part of a border. A margarita bop is highly desirable in gardens for its characteristic long-flowering and colorful blooms. The blooming of flowers of Margarita takes place during the summer and spring seasons; the flowers are usually purple and blue. It is also tolerant of a wide range of garden circumstances.

The perennial herb was discovered and described by Bert Wilson of Las Pilitas Nursery. The herb is capable of tolerating almost any type of soil since it is easy to grow. 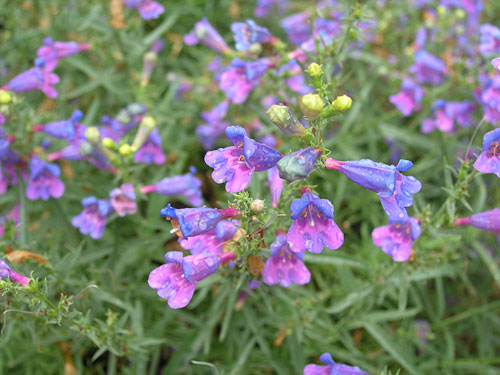 The growth rate of a Margarita herb is slow. It is considered as low growing penstemon having linear and narrow leaves with profuse blooms that begin with blue color and turn later on rose-purple. This plant is evergreen.

It is a perfect choice for gardens native to California. It is placed on banks, around boulders. With that, it is also mixed; with a wide range of herbs and perennials. Its growth rate is optimum under the conditions which include exposure to full sunlight, good drainage, low amounts of water supplied during the summer.

After its proper growth, it adds value to wildlife, functions as a raised planter, container plant, flowering accent plant, and attracts butterflies and hummingbirds. A Margarita bop is a spreading plant exhibiting a foliage color of medium green. Various cultivars of this herb are selected for their plant form and flowers for use in the Mediterranean climates.

The care of each plant is necessary to help it reach its maximum size and prevent it from damaging. The same goes for a Margarita bop plant.

The first thing to keep in mind while ensuring it cares is to place it loosely in the soil with fair enough drainage. The pinching process of tall varieties of the Margarita bop produces more compact plants. It can be divided every three to four years in spring by digging up mature rhizomes and then replanting; it will self-sow then. The foliage of the plant may also be trimmed; right after blooming to freshen. Remember to keep it clean during the fall or spring. A margarita may benefit from dry winter mulch in colder zones.

Various problems may arise as a result of unfavorable surrounding conditions. The problems associated with a Margarita bop may resemble those problems caused by pests and plants. Therefore, the know-how of what is wrong with it may require the assistance of an experienced plant nursery professional.

Less sunlight or excessive sunlight both create a problem for the perennials. Lesser exposure to sunlight causes flowers to lose colors and leaves to turn yellow. Not only that, but it also causes stems to grow larger as the plant strains to reach sunlight. On the contrary, excessive exposure to sunlight may cause heat stress, symptoms of which include browning around the leaf edges. Too little water may also stop the growth in a Margarita bop causing discoloration in the leaves and flowers. Similarly, excessive water also does not work well for it. If the plant does not get enough fertilizer, the growth process becomes slow.