Jointed Goatgrass is mostly present in the Western part of the United States. It is also known as Aegilops Cylindrica Host and is characterized as an invasive weed that creates significant problems for the farmers of the winter wheat. It competes with wheat for sunshine, soil moisture, and nutrients and affects wheat productivity. It is an exceptionally strong competitor when faced with adversity, such as drought. Jointed goatgrass is most commonly found at elevations ranging from 800 to 4,000 feet and in regions that receive between 10 and 20 inches of yearly rainfall. 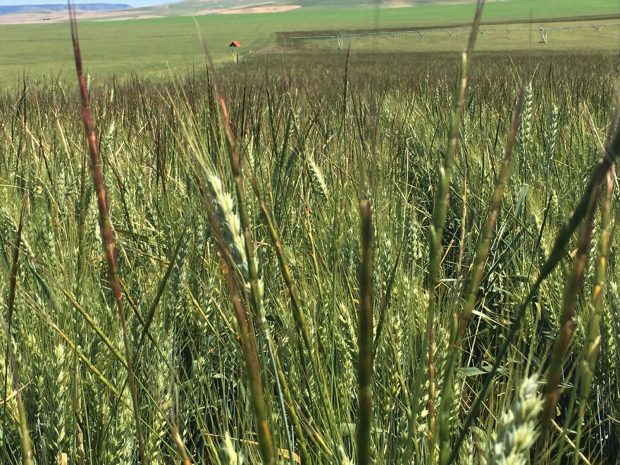 Jointed goatgrass leaves are up to 12 inches broad, with fine hairs equally distributed along the leaf margins and below the sheath opening. The stems reach a height of up to four feet and are topped with thin, cylindrical spikes that have the appearance of several joints placed on each other’s top. This winter’s annual grass weed is identified by the following features:

Joint goatgrass seedlings emerge when the soil is damp, which is usually between September and the beginning of November.

The plant enters a state of dormancy over the winter months and then begins to produce seed in the springtime, typically before the winter wheat inflorescences appear. The seed possesses a long anthesis cycle, allowing it to benefit from favorable weather conditions.  Drought tolerance is higher in jointed goatgrass than in wheat crops as well as other annual grasses.

It is difficult to control jointed goatgrass because of seed survival in wheat-fallow rotations. The seeds of the jointed goatgrass are capable of surviving for two years or even longer even after a year of fallow. This collection of viable weeds seed is known as the soil seed bank. In the following wheat crop, some of this seed germinates and forms new jointed goatgrass plants. These new plants generate even more seeds, causing future wheat crops to become even more infested.

Jointed goatgrass affects the production, profitability, and yield of the winter wheat. It is of great importance in or near winter wheat-fallow production areas. In wildlands, the infestation goes undetected until it is serious. It is frequently observed that wheat is grown as a cover crop during wildland restoration operations, such as reseeding after wildfires. It is difficult to eradicate jointed goatgrass selectively in wheat fields and natural grasslands. In addition to reducing grain quality and yield, jointed goatgrass serves as an overwintering host for wheat crop bugs.

When it comes to managing this weedy species, the main goal is to prevent the spread of jointed goatgrass. When growing winter wheat in any wilderness scenario, it is recommended to always utilize certified weed-free seed from a reputable seed supplier. Before putting harvesting equipment into fields, it is essential to check and make sure that it is clean and does not contain any weed seed.

Once grown, jointed goatgrass spreads only by seed. It is important to focus on eliminating seed production and minimizing the chance for seeds to germinate in the soil. Controlling jointed goatgrass usually takes several years of treatment. To stop new plants from growing from the seed bank, it is essential to keep an eye on them and take more steps over the next one to two years. For the most effective control, a mix of biological, mechanical, chemical, and cultural approaches is preferred.