Cheeseweed mallow plants are widely grown everywhere, including lawn, parkway, drainage, ditches, landscapes, and mostly where its requirements can be fulfilled naturally. They are mostly found in November or December or the rainy season, and in simple words, they are found when the temperature is very pleasant, like a little cold and moist. It is the plant from which marshmallows are initially made, but many candy makers are making marshmallows from gelatin and leaving this beneficial weed. Hibiscus flowers also came from this family. Mallows are also known as cheese weeds because its fruiting head shows some common features like miniature wheels of cheese. Usually, it is a ubiquitous weed that can be found everywhere where the atmosphere is cold, moist, and damp. It is mostly found in countries like Europe, North Africa, and South-Western Asia.

The cheese-like plant has many benefits. It contains many vitamins and many beneficial components that can help treat many illnesses and diseases common these days. Cheeseweed mallow is enriched with Vitamin E, which is most helpful in today’s world. In this current situation like coronavirus, we need to increase our immunity to fight this deadly virus. So this weed, which has most of the vitamin E quantity, helps boost our immune system. It is also beneficial to improve your skin health because vitamin E can renew your skin and make your skin young and healthy. Many natural cosmetologists use this weed to make many worthwhile creams that include mainly anti-aging Cream. Cheesewood mellow also contains Vitamin C, which helps to repair our body cells and maintain our bones, cartilage, and teeth. It also helps the immune system and is also an antioxidant. Magnesium, Iron, and Copper are the nutrients that are also included in cheeseweed mallow. We can say that it is a very beneficial weed that contains many nutritional elements, and it can also treat many illnesses and diseases. 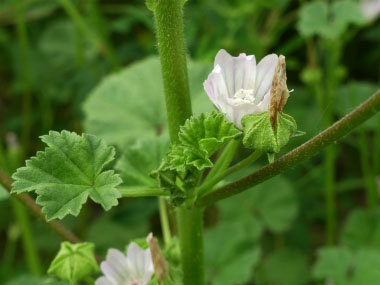 Initially, marshmallows are made from cheese weed mallow. It has many benefits that are a God gift to our world. It can mainly treat Digestive Issues. It protects our Immune System because it contains Vitamin C and vitamin E. It has some Anti-inflammatory Action that is used to cure any inflammation. It can cure your Sleeping Problem and Respiratory Illnesses. It can also relieve your pain, treat a cough, asthma, and bronchitis too. It also Treats infections, skin sores, and burns. It has some Anti-aging properties that help to improve your skin. Protects the gums from infections, Prevents prostate cancer, and the most important thing is that it can help treat kidney stones and urinary tract infections common in most people because of the lack of pure and mineral full water. It is also used to heal wounds. Its wood is used to make toothbrushes. It is used to make dyes and also Treat acne.

It is as same in color as many seeds: Brown or brownish-green when it is on the way to ripe. It is about 2.5 millimeters in length and 5 to 7 millimeters wide in diameter. Its shape is the same as the shape of the cheese wheel, and that’s why its name is also called cheeseweed. Its seed also has many benefits and uses. Its main use is to make Cream, yellow and green dyes, and the dyes can be made using this plant and its seed head.

This plant grows in landscapes, gardens, and lawns. This plant can also serve as a reservoir for several plant viruses, including alfalfa mosaic virus, yellow tomato loop, and wilting with tomatoes. It grows close to the soil, inhibiting the growth of desired native plants and reducing plant biodiversity, which is important for pollinators and wildlife.
Although it is a very beneficial weed in many aspects from its tip to toe means from every part of it, it’s very beneficial, if you have no use of it so you can also get rid of it but you need to put in much more effort to get rid of it. You can water that part of the weed. You can also plug that out while wearing gloves on your hands. Usually, you can only get rid of the smaller one if it is too old, so no herbicides work to get rid of the older one. It would help if you dug bigger till you end up with their roots. It is at that moment not confirmed that it will not grow again because maybe some of its parts will remain there, and it will grow again. It can also be killed by using chemicals including glyphosate herbicide.