Ceanothus Skylark is a bushy and perennial shrub that grows clusters of cerulean blue flowers during late spring and early summer. The flowers are large numbers and are so well arranged that they cover the bush entirely and showcase a beautiful floral display. This perennial shrub serves as a favorite spot for birds, butterflies, and hummingbirds and is usually ignored by deers. They can tolerate any condition and can bloom in both coastal and interior sites. One thing you need to take care of is not to plant them near wetter areas than average conditions. Otherwise, the plant will start wilting and will ultimately die in the end. They grow well in moist soils, but neutral ones are highly preferred.

In this article, you will learn about Ceanothus Skylark’s growing rate, pruning, size, height, and some essential characteristics.

Ceanothus is a susceptible plant. The care given to them when they are first planted determines the lifespan of the Ceanothus. They rarely suffer from pests and diseases, but they should be protected from strong winds and high;y wet soil. If the growing conditions are not desirable, they will suffer a lot. For instance, if the ground they are grown in is too wet, the plant will die slowly. As Skylark is susceptible to root damage due to damp soil, it is better to plant it during spring.

They have a moderate growth rate and have a very short lifespan of about 5 to 7 years. They can tolerate full sun but also grow well in shady conditions.

One common complaint is that the branches break and split. This is a feature of Ceanothus rather than a pest or disease. As stated earlier, they are relatively short-lived shrubs, so don’t expect them to live much longer than five to seven years, occasionally some do, but the majority don’t. 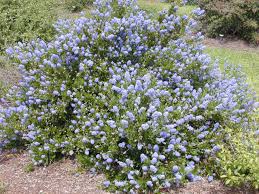 Ceanothus Skylarks need special care when they are first planted. Choose a less windy place and soil that is not too wet to grow the Ceanothus plant better.

Regular pruning is not required in the case of Ceanothus Skylark. They do not respond well to the pruning of main branches. To have an evergreen Skylark, the key is minimum to no pruning at all. If your Skylark has outgrown its allotted space, cut its thin stems and not the main branch after producing flowers.

You should dedicate enough space for Ceanothus Skylark to reach its optimum growth level. Otherwise, it will not tolerate hard pruning to shorten the size of the plant.

It is a ubiquitous feature of Ceanothus that its branches or stems will break on their own, rather than falling off due to the effects of any pest or disease. As stated earlier, Skylarks have a concise life of about 5 to 7 years, and we cannot expect them to live much longer.

The Skylark is a compact, domed, or mound-shaped plant with lustrous dark green foliage and a long, bold floral pattern with dense clusters of tiny blue flowers that almost cover the bush. The flowering period also begins later than that of the species, starting in late spring and continuing in summer. Adult specimens can grow up to 5 inches in height and spread out to fill 7 inches.

Ceanothus Skylark is a precious plant due to its perennial habit and late flowering. This plant grows in bunches of dark blue flowers on short stems that look pretty attractive. You can grow Ceanothus Skylark in hot areas. It is believed to be a hybrid of Ceanothus thyrsiflorus and C. velutinus.  Ceanothus also provides seeds that serve as food for bushtits, mockingbirds, quails, and finches.

Ceanothus Skylark, commonly referred to as blue mountain lilac or blue flower, is an evergreen shrub that grows in coastal areas as well as rocky, marine, open, and wooded slopes, cliffs, and plains along the western coast of the United States from northern California to Oregon.

Mature plants can be erect, reaching 5 inches in height with the same or greater width. Terminal clusters of tiny blue flowers bloom from spring to early summer. This plant is a food source for many butterfly and moth larvae, including spring azure and California turtles. The flowers of Skylark are attractive to insects, and birds and small mammals eat the seeds.