Learn all about bumblebee vs. honey bee sting, size, pollination and difference between them.

Honeybees are more slender in body appearance, have fewer body hairs and wings that are more translucent. The tip of their abdomen is more pointed. In the early 21st century, only seven species of honey bee are recognized, with a total of 44 subspecies, though historically seven to eleven species are recognized.

The best known honey bee is the Western honey bee which has been domesticated for honey production and crop pollination.

Both bumblebees and honeybees are classified in family Apidae, but are separated into the genera Apis and Bombus. The genus Apis contains four honeybee species the common or European honeybee (Apis mellifera), the dwarf honeybee (Apis florea) the giant honeybee (Apis dorsata), and the Oriental honeybee (Apis cerana). 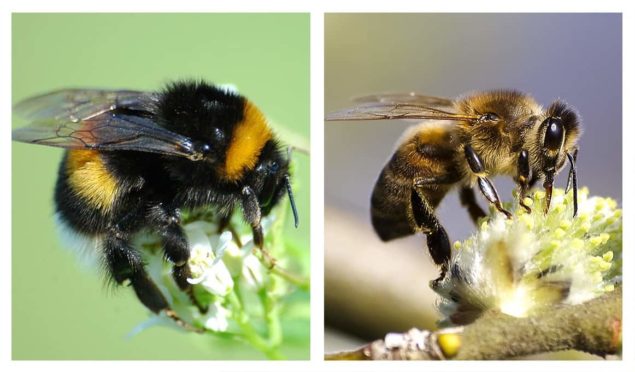 Bumblebees are large, fuzzy insects with short, stubby wings. They are larger than honeybees, but they don’t produce as much honey. However, they are very important pollinators. Without them, food wouldn’t grow.

What is Honey Bee?

A honey bee (or honeybee) is any member of the genus Apis, primarily distinguished by the production and storage of honey and the construction of perennial, colonial nests from wax. Honey bees represent only a small fraction of the roughly 20,000 known species of bees. Some other types of related bees produce and store honey and have been kept by humans for that purpose, including the stingless honey bees, but only members of the genus Apis are true honey bees. The study of bees, which includes the study of honey bees, is known as melittology.

Bumblebees are social insects and there is a certain level of interrelation between individuals of the same colony. The colony is divided into a number of groups, each with a specific task. At the top of the hierarchy stands the queen that differs physically from the workers by its size which is much larger. Honey bees, although one of the most popular bees, represent only a small percent of bee species. Honey bees are the only surviving group of bees from the Apini tribe, which is under the Apis genus. They are known for producing and storing honey, or liquefied sugar, as well as building impressively large nests using wax secreted by workers in a particular colony.

Bumblebee workers and queens have a stinger, as is the case with honeybees and wasps. Drones cannot sting. The stinger is a weapon for defence. When a bee stings, some venom is injected into the body through the stinger. In humans, this generates a short severe pain that then fades away. Occasionally (in approximately 1% of cases), an allergic reaction against the injected venom develops. The response to a bumblebee sting can differ per incident. The stinger of a bumblebee or a wasp has no barbs. This means that the worker or queen can withdraw her stinger, and is able to sting again. A honeybee’s stinger does have barbs. When a honeybee tries to withdraw its stinger, it tears loose from the abdomen, taking the venom gland with it.

Pollination is the transfer of pollen, containing the male gamete of a plant, from the anthers where it is produced to the receptive stigma, the female part of the same or another plant of the same species. This process results in fertilization, and sexual reproduction of the plant to produce seeds. Most ancient plants were pollinated by wind. Grasses, conifers, and many deciduous trees are still wind-pollinated.
Bumble bees are reared commercially for shipment to growers especially for greenhouse grown crops such as tomatoes which require “assistance” with pollination. Tomato pollen does not loosen easily. Each flower must be vibrant to ensure pollination.

Bumblebees are good at learning how to extract pollen from different ﬂowers and can even specialize in certain species. And this greater ﬂexibility makes them adept at cross-pollination, which is particularly important for fruit trees. Moreover, bumblebees are more resistant to weather conditions such as cold, rain, and limited light.

The one advantage honeybees have is communication: they actually perform a dance to let their fellow workers know where good supplies of pollen can be found! Although this is good for their colony and honey production, it can actually be a disadvantage in terms of pollination. Whereas honeybees will rush off to mine a certain pollen source, bumblebees will stay around, patiently working an extended area until it is fully pollinated.

Bumblebees are robust, large in girth, have more hairs on their body and are colored with yellow, orange and black. Their wings can be easily seen since they are darkish in color. The tip of their abdomen is rounded. Bumblebees also live in social colonies, but they make their home in places like burrows or debris piles. While honeybees are more slender in body appearance, have fewer body hairs and wings that are more translucent. The tip of their abdomen is more pointed. Honeybees build complex hives to house thousands of bees in one colony