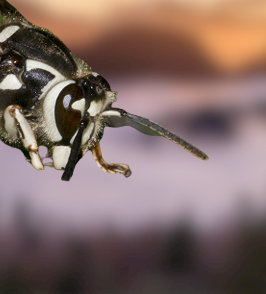 White-faced hornets possess stingers that are not barbed, allowing them to sting more frequently than certain other stinging insects, which can only do it once. Consequently, the white-faced hornet is able to repeatedly strike and inject a considerable amount of poison into its victim.  The sting of a White-Faced Hornet is very unpleasant because it is poisonous. The venom that is injected by the stinger causes the affected area to be painful, itchy, and swollen for approximately twenty-four hours. Their stings are excruciatingly unpleasant and necessitate medical assistance. Ice, along with acetaminophen or ibuprofen, mostly helps alleviate the pain in the majority of situations.

White-faced hornets, sometimes known as bald-faced hornets, are known for their vicious nature. The stingers of yellow jackets, on the other hand, are smooth and do not contain a barb, allowing them to sting and then be withdrawn from a human or other victims without causing any harm to the stinger.

The behavior of white-faced hornets is distinct from that of other hornet species. They’re the kind of social insects that build elaborate nests for themselves. Their food consists of both carbs and proteins, and they become aggressive only when they are disturbed.

The white-faced hornet is a social insect that lives in vast colonies within a single nest. There is a social order in a colony of white-faced hornets, with the queen being at the top of the food chain and the workers serving her. The worker wasps construct new parts of the nest and deliver food back to the colony. The worker wasps are also responsible for taking care of the eggs that the queen wasp lays. To grow the colony, the queen wasp’s only purpose is to breed and generate young worker wasps.

Adult white-faced hornets use nectar and plant sap for food. This is taken from the plants that are located close to the nesting place. The wood from neighboring trees is gnawed up and used in the construction of the nest, which can grow to a height of up to three feet. As a result, the white-faced hornet often builds its nest in a forest where many plants provide nectar and sap.

Queen hornets, who are pregnant, build nests and lay eggs that develop into female workers who are sterile and take care of the young. At this stage, the nest is little and much easier to remove. The worker wasps bring the larvae pre-chewed insects, spiders, and other insects of a similar nature to nourish them until they reach adulthood.

During the winter, the fertile and pregnant females hibernate, leaving the nest empty as the workers and males perish. The next spring, a new nest is established by the new queen.

White-faced hornets go through four distinct phases during their existence:

When the queen wasp lays eggs, a new wasp’s life begins. In the spring, when the queen wasp emerges from her winter hibernation, she begins building a nest and laying her eggs. White-faced hornet larvae are soft, cocooned things that differ greatly from adult hornets in appearance. The white-faced hornet develops into an adult hornet after emerging from its cocoon as a pupa. The worker hornets look after the succeeding egg colonies whereas the queen only looks after the initial batch of eggs. Throughout the summer, the queen lays and hatches eggs to replenish the nest’s worker wasp population so that she can devote her whole attention to egg production.

The majority of wasp offspring groups are composed of sterile females, which means they are unable to generate their progeny. One group consists of fertile female wasps that will one day mature into queen wasps and have the ability to have their progeny. The other group is made up of males who will eventually help the newly emerged queen wasps reproduce. The lifespan of the white-faced hornet is rather brief since the worker bees all perish when winter hits.