Carl Linnaeus, a Swedish taxonomist, initially identified the varied carpet beetle as a skin beetle in 1767. The adult varied carpet beetle is approximately 1/10 of an inch long, black, and has an uneven pattern of scales on its wing covers that are white, brown, and dark yellow. When the beetles get older, the scales that make this pattern fall off, so they look brown or black all over.

Female beetles typically look for spider webs or the nests of other insects or animals when they are ready to start a family in the field. These nests and webs include dead insects, pollen, feathers, beeswax, and other waste that is consumed by larvae. Beetles lay their eggs indoors on or near items made of wool, such as carpets and rugs, woolen goods, animal skins and furs, animal horns, hair, silk, dried plant products, stuffed animals, feathers, and more. Adults usually show up in the spring or early summer, and they like to stay near windows when they’re inside. 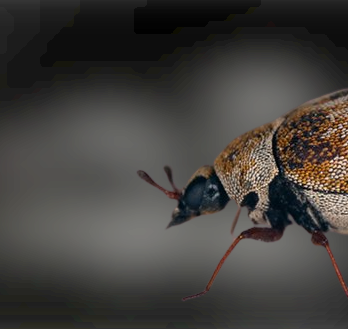 The varied carpet beetle is widespread throughout the United States. The adults are significantly less noticeable than the larger black carpet beetle. When viewed from above, their bodies take on a more rounded appearance, and the upper surfaces of their wing covers are scaled in a pattern that consists of white, brown, and yellow scales.

Adult varied carpet beetles are tiny (3-5 mm or approximately an eighth of an inch), oblong beetles with, depending on species, either dark or patterned wing covers. Larvae are similar in size and shape, with a tapering body. Larvae feature alternating bright and dark patterns and are wrapped in microscopic hairs that ‘puff up when disturbed. Larvae of carpet beetles mostly grow as long as 0.6 cm. They are oval, and the way they look depends on what kind of carpet beetle it is. Carpet beetle larvae come in a wide variety of colors and patterns, from hairy to hairless to striped.

The adults lay their eggs on things that they eat, like furs, woolen fabrics, and carpets. Larvae emerge from their eggs in about 2 weeks at room temperature (25-26 C° or 77-78 F) and feed for several weeks to months, depending on the species and the surrounding environment. When the larvae are ready to pupate, they either continue to burrow into the food or move on to a new location. If they can’t find any other safe place to hide, they even pupate inside their final larval skin.

Eggs of the Varied Carpet Beetle are generally discovered in closets or beneath furniture, which are sheltered areas of the home. Eggs are round, white, and smaller than one millimeter. The Varied Carpet Beetle lays its eggs in air ducts because it travels by air currents. Some adult beetles often go to great lengths to locate a safe and protected location in which to deposit their eggs.

It is not necessary to be alarmed if one or two different species of carpet beetle are discovered in a residence. In addition to being prevalent in the field, carpet beetles of varying species are commonly brought inside utilizing unscreened doors and windows, firewood, and cardboard boxes originally housed in garages.

Several measures, including the following, can be taken to assist reduce the risk of carpet beetle infestations:

Carpet beetles need to be removed from large items, like furniture, by a professional who knows how to get rid of pests. Because carpet beetles typically infest preserved animals or hides, it is important to carefully inspect these things for signs of living larvae when an infestation of carpet beetles is suspected.