The Dermacentor andersoni (Rocky Mountain Wood tick) resembles the American dog tick in appearance but can be differentiated by its brilliant red, teardrop-shaped body. Males possess grey and white patches on their bodies, while females possess a white shield. They are predominantly located in South Dakota, Arizona, Nebraska, New Mexico, and California, which are Rocky Mountain states.

The saliva of Rocky Mountain wood ticks includes a neurotoxic that, in rare cases, causes tick paralysis in both humans and animals. In most cases, a bite from an adult female generates an ascending paralysis that disappears between 24 and 72 hours after the tick removal of the tick.

Adult ticks obtain the majority of their nutrition from large mammals; however, tick larvae and nymphs graze on rodents of a smaller size. Adult ticks are primarily responsible for infection transmission to humans.

After feeding on rodents and other small mammals, Rocky Mountain wood ticks become infected with Rocky Mountain spotted fever and are able to spread it to other hosts. This Rocky Mountain spotted fever is a serious infectious disease with an untreated death rate of around 20%. This infectious disease’s primary manifestation is a rash that appears anywhere from two to five days after infection, initially affecting the hands and feet before moving on to other parts of the body. Before transmitting the disease, a tick must be attached for longer than two hours, making early detection crucial. 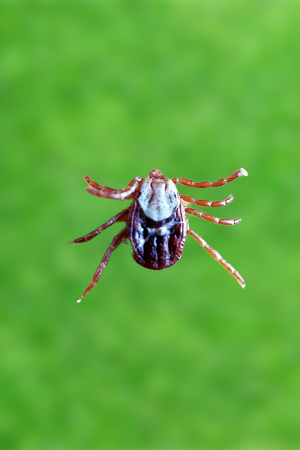 Colorado tick fever, a short-lived virus with a low death rate, is transmitted by Rocky Mountain wood ticks. Symptoms of this sickness include a sudden onset of saddleback fever, headache, muscle discomfort, and a decrease in white corpuscles in the blood. Unlike tick-borne infections such as Lyme disease, there is usually no associated rash. The disease strikes adult males more frequently than it does adult females or younger males, but it also affects females and younger males.

Tularemia is most commonly passed on by rabbits and rodents, but this tick species is capable of passing it along as well. Tularemia signs and symptoms include fever, soreness, enlarged lymph nodes, prostration, and ulcers in the area of the tick bite.

The bite of the Rocky Mountain Wood Tick plays a vital role in the spread of various diseases. These diseases include Colorado tick fever, tick paralysis, Rocky Mountain spotted fever, and tularemia, which is caused by a virus. The Centers for Disease Control and Prevention (CDC) report that those infected with Colorado tick fever experience fatigue, muscle pain, and fever.

Tick paralysis is caused by bites from Rocky Mountain wood ticks if they are allowed to feed for 5-6 days. Unsteadiness and a lack of reflex actions are typical early indicators of paralysis, which typically manifests in the extremities first. It is possible to die from respiratory collapse if a tick is not removed.  But if the tick is taken off correctly, the person gets better quickly, usually within 24 to 72 hours.

Rocky Mountain Wood ticks are most commonly found in shrublands, moderately forested areas, open grasslands, and along trails. They are found primarily at subalpine elevations in the northwest Pacific regions and the Mountain.

The Rocky Mountain wood tick derives its name from its predominant distribution in Rocky Mountain states, including Colorado, Idaho, and Montana, among others. This tick species prefer woody habitats such as meadows, lawns, and forests as its natural habitat.

Each life stage of Dermacentor andersoni (larvae, nymphs, and adults) feeds on a different host. Adult ticks stay in the environment over the winter. They start to come out of hibernation in early spring, soon after the snow melts (a few days when the temperature is above 5°C). In their attempt to find a suitable meal, they mostly go to the tops of grass blades and other low vegetation and wait there.

After successfully attaching to a host, adult ticks mostly feed for almost a week, reproduce, and then release their former host back into the environment. After around seven days, the females give birth to their young and then eventually die. Eggs hatch about a month after being laid, with the emerging larvae spreading from the egg mass and aggressively seeking hosts, which are typically tiny mammals such as mice, squirrels, gophers, chipmunks, and small predators. If they are successful in locating a host, they feed for two to six days before dropping off into the environment, where they shed their skin and mature into nymphs.

Most nymphs don’t start feeding until the next spring or summer, and even then, they tend to stay dormant under ground cover. Once they begin questing, they look for tiny animal hosts on whom to feed for a week. After this, they detach themselves from the host and begin the transformation into adulthood.