A native shrub to the state of California, Eriodictyon parryi is also referred to as poodle dog bush. Its seeds have a long dormancy period in the ground. The plant recovers quickly from fire and aids in the control of soil erosion. It grows in Southern California’s fire zones and is easily spotted along the Pacific Hiking Trail. Its leaves resemble the head of a poodle, and it produces lovely purple flowers in the spring and summer.

The height of a young plant is mostly as little as a few inches or as much as 6 feet or 2 meters. This native plant grows profusely after wildfires and along trails. Poodle-dog bush is common in Southern California.

Poodle-dog bush aids in the healing of the planet because its deep roots bind the soil together. Doing this prevents mud and other debris from being kicked up after a fire and encourages the growth of new plants.

The flower bunches and hairy stem of this plant are quite identical to those of many other plants belonging to the genus Phacelia; however, this plant is taller than those other plants, thus it is often differentiated by this feature from them. 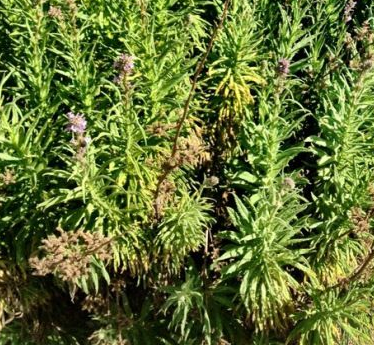 It is more challenging to recognize other species of the same genus, such as yerba santa.  All of the plants smell the same.  The yerba santa varieties do not irritate the skin and are not as well-adapted to growing in disturbed settings like burned areas. Yerba Santa is predominantly found in Northern California, whereas PoodleDog Bush is typically found south of San Luis Obispo.

Each stem of E. parryi grows straight up from a central taproot and is covered in thick leaves to create a symmetrical cone shape. The stems of E. trichocalyx are slender, woody, and branched, and the leaves are rough, leathery, and dark green. E. parryi is an opportunist that grows quickly, and when combined with E. trichocalyx, it appears to be visibly younger and fresher than the latter. In burned areas, Yerba santa mostly develops through crown sprouting, whereas E. parryi grows from seed.

Despite its toxicity, the poodle-dog bush produces a lovely show of clustered lavender-colored flowers. From June to August, when it is warmer, the flowers mostly bloom. In addition to the blossoms, the poodle-dog bush is quite fragrant. This is another indicator of its identity.

This plant irritates the skin as much as poison oak. There is a possibility that blisters emerge on the skin and stay for at least two weeks. Hikers who brush up against or touch the plant often pick up some of its sticky hairs, which are embedded in its surface. After contact, symptoms such as swelling, redness, and itching emerge anywhere between 12 hours to 2 days later.

Symptoms usually start anywhere from 12 to 48 hours after contact. Hypersensitive people are more prone to experience symptoms right away. The most common manifestations of this condition are itchy, red welts at the site of contact with the shrub or a rash that spreads outward from the affected area. There will also be redness, burning, and itching in addition to rash.

The poodle-dog bush’s leaves are where the stinging hairs are located on the plant. There are little, greasy, and sticky hairs all over the leaves. An allergenic oil that is applied to the stickiness of the hair triggers an allergic reaction in the body. The duration of most symptoms caused by contact with the poodle-dog shrub is between one and three weeks.

The first and foremost thing that has to be done is to immediately wash the area with a solution of warm soapy water to get rid of any plant oils. Sometimes plant hairs are inserted. When it comes to getting rid of any unwanted plant hairs, some individuals suggest applying a piece of sturdy tape to the skin, forcing it into place, and then peeling it off. It is often recommended to avoid touching the affected region to prevent the spreading of the oils.

Antihistamines like Pepcid or Benadryl, which are not effective against the poodle-dog bush, do not alleviate the symptoms of burning or itching. This is because the body does not react with a histamine reaction when the allergy is triggered. The most effective treatment for localized symptoms is the application of cold compresses made of water, aluminum acetate, or calamine lotions. Lukewarm baking soda or oatmeal showers are also helpful against this rash.