Mirabelle is a plum that grows in the Mediterranean areas of Europe and it mostly prefers USDA zones from 5 to 9. It has high sugar content. This plum possesses yellow skin that is often speckled with red spots and yellow flesh that is firm.

Plums of the Mirabelle variety are typically cultivated in the Lorraine area of France. These plums with high sugar content are well known for being used in a variety of jams, jellies, baked goods, and fruit brandies. It is feasible to cultivate Mirabelle plums in a home garden; however, genuine Mirabelle fruit, which is grown in France, cannot be imported into the United States because of restrictions placed on the importation of fresh fruit. Many American gardeners are surprised by the fact that the importation of fresh, high-quality Mirabelles is restricted.

The Mirabelle plum is a specific variety of plum trees. The mirabelle plum most likely developed from a hybridization of the cherry plum and the plum. Its scientific name, syriaca, shows its Asia Minor roots. The world’s largest mirabelle plum cultivation region is in Lorraine. The size of Mirabelle trees rarely exceeds six meters. They are often grown into attractive trees, although their growth is typically sparse and bushy. In April and May, when the white blossoms are at their peak, they are a sight to see and a bountiful source of nectar for a wide variety of beneficial insects. These plums are difficult to identify because of the numerous hybridizations. Important identifying characteristics include late blossoming, hairy flower stems, and round, slightly serrated leaves. 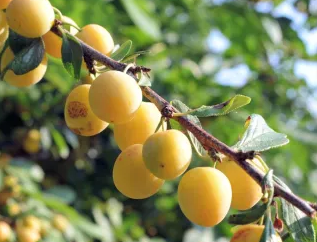 There are currently Mirabelle tree growers in the United States. It is not possible to grow the tree from seed; instead, it is often grafted onto a more robust rootstock. Mirabelle trees thrive in temperate regions. They do not grow in the north, where spring comes very late, or in places where summers are very hot. Mulching using grass clippings helps trees retain moisture in dry years.

In Lorraine, the optimal seasons for planting and pruning mirabelle plum trees are autumn and winter. By preserving only three or four major branches and leaving the core of the tree exposed, growers hope to achieve an upright shape. Growing Mirabelle requires no effort other than periodic trimming and the removal of suckers.

The crop needs to be watered consistently once a month all through the growing season. It is beneficial to increase the quantity of irrigation during the dry season.

Feeding time is a good opportunity to interact with Plum Mirabella. Urea is often used as a fertilizer for the plant from spring through fall, at a rate of 50 grams of the chemical per 10 liters of water. The recommended amount of mortar for each tree is 2 liters.

The root system of this plant is mostly fed with a Heteroauxin solution to encourage growth and development. In addition, to increase the chances of getting a harvest, it is recommended to hydrate the tree with slurry or saltpeter at a ratio of 1 tablespoon per 10 liters of water.

Due to the absence of side shoots, Mirabel does not require any type of trimming or crown growth. The goal of sanitary pruning is to remove dead, dry, or otherwise damaged branches. In the event of severe frostbite, the tree’s top is also pruned. Lorraine mirabelle plum trees are best planted and pruned in autumn and winter.

The goal of the growers is to give the tree an upright form while preserving only three or four of the tree’s primary branches and leaving the trunk open. The Mirabelle tree is typically first pruned just after planting. The Mirabelle tree needs to be pruned regularly to ensure a steady supply of fruit.