Golden Buprestid is a flat-headed borer. It is also known as Buprestis aurulenta Linnaeus. These species reside in North America. It burrows its way through places for its selfish purposes. The majority of this species’ beetles eat not just the leaves of numerous plant species, but also considerable amounts of timber from houses and trees.

Golden buprestid beetles, thus, are also residential pests. These insects do significant damage to the home if they are present in sufficient numbers, specifically if they are not adequately controlled. These are also known by the name jewel beetles and are referred to as metallic wood-boring beetles.

These beetles are also referred to as metallic wood-boring beetles which are also known as “jewel beetles”.

The wing covers of these beetles are principally a glittery metallic green tint with blue and purple accents and a coppery-orange edging. Adult beetles live in decaying or dead trees, as well as lumber and growing plants. Larvae are frequently born and raised in these regions. The golden buprestid can eat through wood. Despite this ability, golden buprestids are not completely unbeatable. In fact, by taking a few precautionary and practical steps, it is possible to destroy them completely. 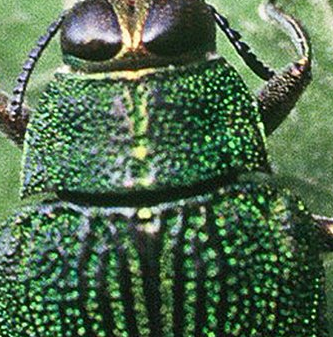 Buprestis aurulenta, often characterized as the golden buprestid or golden jewel beetle, is a beetle species belonging to the Buprestis genus. The larvae of B. aurulenta live inside many different kinds of coniferous trees, and they live for a long time in dry wood.   Jewel beetles are considered the third most dangerous beetle forest pests, and they are frequently the most dangerous orchard pests. These jewel beetles are capable of biting because they have chewing mouthparts. They also possess strong mandibles or jaws that are used to eat and catch the food. Others utilize these to guard against predators.

Jewel beetles, like other kinds of beetles, go through the full metamorphosis process, which consists of the following phases:

Female buprestid adults normally lay their eggs in the fissures of the host tree’s bark. The larvae burrow into the tree as soon as they hatch. As the larvae eat and grow, they make winding tunnels in the wood. When these larvae are ready to change into adults, they pupate inside the tree. Adults emerge from the tree and leave.

Under typical circumstances, larvae develop in 2-4 years.  When the larvae reached their maximum size, they enter a period of development known as the pupal stage, during which they rest and transform into adults. This process takes place in chambers that are oval and are known as pupal cells. Pupal cells are often developed close to the wood surface.

Adult beetles deposit their eggs on trees, most frequently on trees that are already dead or on trees that are recently cut down and whose bark is still intact. Pitchy timber attracts them, and they lay their eggs there. Eggs are sometimes produced in cracks in freshly sawn wood, and less frequently, they are laid on older structural material that is dry or partially dry. Golden Buprestids re-infest a building if they lay eggs on wood that is old and dry and unpainted or untreated. This adult golden buprestid possesses a lifespan of three to five months.

Adult jewel beetles typically consume either the plant foliage or the nectar of the plants they feed on; however, certain species eat pollen and visit flowers. The larvae of the jewel beetle eat the sapwood of shrubs and trees. Leaf miners and gall makers are two different types of buprestid larvae.

Golden buprestids are herbivores that consume stems, roots, trees, nectar, grasses, and leaves. They also eat the juiciest parts of the plant. Spruce, fir, and hemlock are also preferred by these jewel beetles.

Once the residence of these golden buprestids is confirmed in the home, little control is done by the utilization of various chemicals. But, this chemical control alone is not enough for controlling the population of these beetles. The most suitable and preferred solution is to refinish the damaged surface and fill in the holes. The other solution is the application of kiln drying lumber before the construction. This destroys all insect stages and the growth of these pests is controlled.

It is also possible to minimize the population of golden buprestid by applying pesticide granules to the planting rows. Using chlorpyriphos during later phases of plant development also prevents serious harm.