There are three main castes of the subterranean termite species known as the Formosan termite: the alates (also known as reproductive), the soldiers, and the workers. As the most voracious, aggressive, and cunning of the more than 2,000 species of termites known to science, these pests are often referred to as “super termites” because of their ability to gnaw through wood, flooring, and even wallpaper without being spotted.

These social insects are completely distinct from the others. There are roughly 28 different kinds of these pests, making them the most numerous group. The scientific name for this species is Coptotermes formosanus. Due to their vast numbers, they pose substantial hazards to the home’s structures. They cause a lot of trouble since they are hard to get rid of once they get into an area.

Due to their superiority over other termite species in both wood-chewing and colony growth, these insects are often referred to as “super termites.” The queen termite lives for more than 15 years and lay up to two thousand eggs each day before dying. 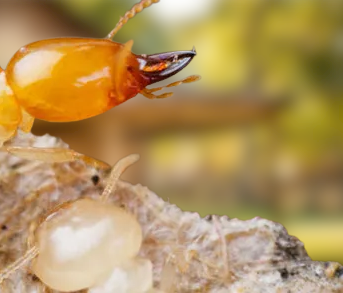 It is crucial to identify the termite species that is creating difficulties, as each species is biologically distinct and so requires a unique treatment strategy. Because of their similarity to other underground termite species such as the Asian subterranean termite and the eastern subterranean termite, it is recommended to seek the assistance of a professional pest controller to positively identify the presence of Formosan termites.

It’s also worth noting that swarmers of Formosan termites are frequently misidentified as ants because of their wingless appearance. The simplest method to distinguish them is by observing the waists, as termites possess wide waists while flying ants possess small ones. The antennae of termites are also straight, unlike the antennae of flying ants, which are curved. Also, the front wings of a flying ant are larger than those of a termite.

Their distinguishing characteristics enable them to be easily identified. For instance:

Their damage is comparable to that caused by subterranean termites, but it manifests itself much more quickly than that of the native kind. It is known that they prey on more than 47 different species of plants, some of which include citrus trees, cherry laurels, cedar trees, sweet gum trees, and wild sherry. In their search for moisture, they are also known to consume non-cellulose materials like thin sheets of soft metal, such as copper and lead, and plaster.

Pests called Formosan termites to cause significant property damage within six months. Most Americans agree that this particular termite species pose the greatest threat to human safety and property damage. Large amounts of damage are done to houses and other buildings before their presence is even noticed. They infest living plants, such as trees and shrubs, as well as wooden railroad trusses, landscaping timbers, and even vessels.

There are two possible ways to treat these termites i.e. through the application of either chemical or natural processes as the means of accomplishing the goal. Nematodes, cardboard, and boric acid are examples of natural approaches. Methods such as baiting and fumigation, as well as a soil treatment, fall under the category of chemical control.

Nematodes are a type of roundworm that are extremely small and are mostly found in a wide variety of habitats. They contain gut bacteria, which makes them highly effective as pest control agents. As soon as the bugs swallow them, the bacteria within begin to rapidly poison the pest, killing it almost instantly.

The primary food source of termites is cellulose, which is present in cardboard. The termites are drawn to them because of the strong woody odor. The odor intensifies when water is sprayed on it.

The southern United States is home to both dry wood and Formosan termites, both of which are notoriously destructive. It is vital to distinguish between the two types of termites because different treatments are used for each. It is easier to manage and avoid a termite infestation in the home if the traits of Drywood and Formosan termites are known specifically their nesting and feeding habits.

Drywood worker termites exclusively eat spring and summer wood while o only spring wood is consumed along the grain by Formosan worker termites. Both species eat almost any kind of wood, including houses, utility poles, furniture, and trees that are dying.