It is the largest member of its family (Cerambycidae family) and is one of the longest insects in North America, measuring up to 40 mm in length and 12 mm in width. It lives in Southeastern Colorado. This bug commonly attacks living trees by feeding on their bases and roots. It feeds on cottonwood and poplar trees.

Larvae do not have legs and have a cross-section that looks like an oval tube. Their bodies are creamy white, and their heads are brown to black. They grow to be one and a half inches long.

There are numerous other plant-eating cerambycid beetles, but few have larger than cottonwood borer larvae that feed on roots. In the summer, adult beetles are found on host plants. They have black antennas that are larger than the rest of their bodies and are powerful.

Cottonwood borers live in the eastern U.S. and southeastern Colorado. Cottonwood borer beetles possess big mandibles that are readily identifiable when viewed from the front. They mostly attack if handled incorrectly. Because of the strength and force of their mandibles, they are capable of inflicting a severe bite, especially if they are handled improperly, which can result in bleeding. But they are not hazardous to individuals and are not fatal. 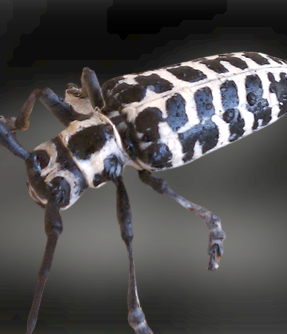 Adults appear in Kansas between late June and mid-August. Adults possess a lifespan of about one month and eat the petioles of leaves, new growth on twigs, and delicate bark. When adults feed on young plants, the young plants’ shoots often become brittle and eventually die.

To construct an oviposition site, females first create shallow trenches in the soil near the root collar, and then they shred the bark with their mouths. At each location, the female places one egg before partially filling the earth’s trenches. To reach the root, the young larvae are required to first tunnel downward into the inner bark.

In bigger trees, larvae don’t usually go deeper than 1 inch into the wood, and they often hollow out areas that are 2-3 inches in diameter, especially in big roots. It takes the larva a year or two to fully mature. From April to early July, the larvae change into adults.

All sizes of trees are vulnerable to the cottonwood borer. If nursery stock is infested with cottonwood borers, young trees often die and shrivel or, if they persist, they frequently break when handled at the root collar.

These insects are dependent on cottonwood for sustenance. Cottonwood is the species’ preferred tree, however willows and poplars are also used. Adults, like other beetles, have mouthparts that are adapted for chewing. When they are active in the summer, they consume the fresh twigs and stems of the tree using their powerful mandibles.

The infected trees’ heartwood is penetrated by the larvae. Infested trees in plantations are frequently infected with larvae, yet rarely die as a result. During times of high wind, trees that have been severely infested may fall at the base.

Adult beetles eat the new shoots of cottonwood, poplar, and willow. This can make shoots shrink and break off, which is very bad for the trees they are on. Larvae consume the internal phloem of trees, particularly at and below the root collar.

The damage is mostly at the base of infested trees, where sawdust-filled tunnels up to 1/2 inch in diameter are bored into the wood. This erodes the trees and makes it hard for water and nutrients to get where they need to go. Trees with damage often blow over and break off at the root. Smaller branches and shoots near the trunk are mostly killed.

Attacks are more common on unhealthy trees or trees in bad locations. As a result, the correct choice of location, together with irrigation and fertilization, are essential aspects in the process of reducing harm. In early September, a pocket knife is used to dig out tree larvae.

Insecticides are used to stop adult females from reproducing and young larvae from burrowing into trees. At the end of June or the beginning of July, it is recommended to use permethrin to gently sprinkle the lower trunk of the tree and thoroughly soak the soil all around the base of the tree. Repeat this process at the end of July. Permethrin is found in a wide variety of items for the home, although few of them are labeled for use against various borer pests.