Acrobat Ants, which belong to the genus Crematogaster, are indigenous insects. They tend to nest in damp, decomposing wood, which makes them pests. Often, this rotting wood is a tree, where the ants often take over the homes of caterpillars, termites, and wood-boring beetles. Acrobat ants also build their nests in decaying logs, on the ground directly underneath boulders, and in a variety of other things that are scattered about on the ground. Their name is derived from the peculiar method in which they hold their “abdomen” or rear end in the air.

The entire country of America, including North Texas, is home to acrobat ants.  The acrobat ants are mostly seen in yellow, brown, black, or perhaps a combination of colors. The rest of their body is often lighter in color than the characteristic heart-shaped abdomen that they possess. The only acrobatic characteristic of the acrobat ant is its heart-shaped abdomen, which, when attacked, folds over its back like a scorpion. 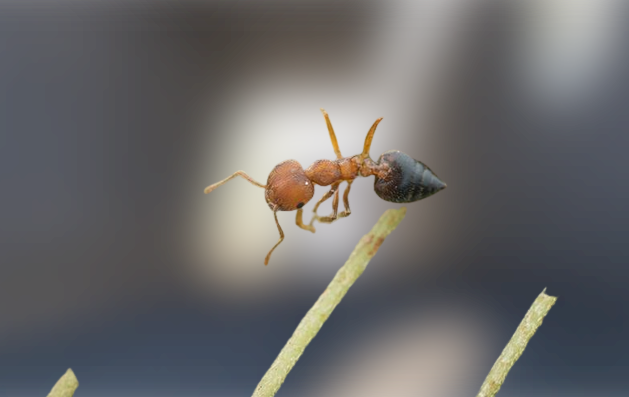 The majority of species range in length from 1/16 to 1/8 inch. Each colony’s workers are all the same size because they are monomorphic. The presence of two spines on the thorax, known as the petiole, which is attached to the anterior abdomen, is a useful feature for the identification. It is best to examine the abdomen from above because it is heart-shaped.

Its heart-shaped stomach is most apparent when viewed from above. The workforce is uniformly sized. It features a three-sectioned club as well as twelve-segmented antennae.

The honeydew secreted by aphids is a major source of nutrition for them. An acrobat’s pedicel contains two nodes. Acrobat ant colonies are often small and consist of a single queen.

Acrobat ants are particularly fond of honeydew released by aphids. These ants often go to tremendous lengths to safeguard the aphids, even erecting a wall of earth around them, just like helicopter parents do.

To defend themselves, acrobat ants alarmingly raise their bellies, release an odor similar to that of decomposing matter, and bite anyone who comes too close to them. The bite is accompanied by a minute injection of venom, which mostly cause the victim’s skin to sting and burn. When disturbed, the workers bite viciously and emit an offensive odor.

Small amounts of swelling, redness, discomfort and itching are frequently experienced after being bitten by an acrobat ant.  Avoid scratching the area and instead, wash it with soap and water to stop any infection from setting in. Calamine lotion and antihistamines are two common OTC drugs that help reduce discomfort and itching.

The stinger on acrobat ants is rarely used, and the pain it causes is typically only temporary. The stings of acrobat ants cause some discomfort, but they pose little threat to humans, animals, or buildings. When they build their nests and forage inside, these ants become a real pain. Acrobat ants also cause short circuits in electrical or telephone wiring by removing the insulation around the wires.

An in-depth examination and accurate identification are prerequisites for effective acrobat ant control. The most efficient method of controlling ant populations is to eliminate their nests. Both internal and external inspections are required. The ants inside often come from an exterior nest. Locating acrobat ant nests inside a building is quite challenging. Check for cracks, rot, and evidence of prior infestations of wood-nesting insects, such as small holes and stains. An accumulation of the debris that the ants leave behind is one possible indicator of an ant colony’s presence, particularly if the colony is found in rigid board insulation.

If it is not possible to remove nests from a structure, sprays or specks of the dust put directly to the nest are mostly utilized effectively. When applying dust in tight spaces, it is important to think about using dust applicators that possess a directed tip or aerosol sprays that come with a straw attachment. It is advised to store food in containers with tight seals to discourage acrobat ants from searching for food inside.

By pruning tree and shrub branches so that they do not contact the structure and provide a direct path to enter, it is possible to deter infestations from entering from external sites.

The Acrobat Ant and the Carpenter Ant are both known for their destructive abilities to wooden buildings. These species of ants make nests by tearing and ripping wood. The acrobat ant, which ranges in size from 1/8 to 3/8 of an inch and features a heart-shaped belly, is significantly smaller than the carpenter ant.